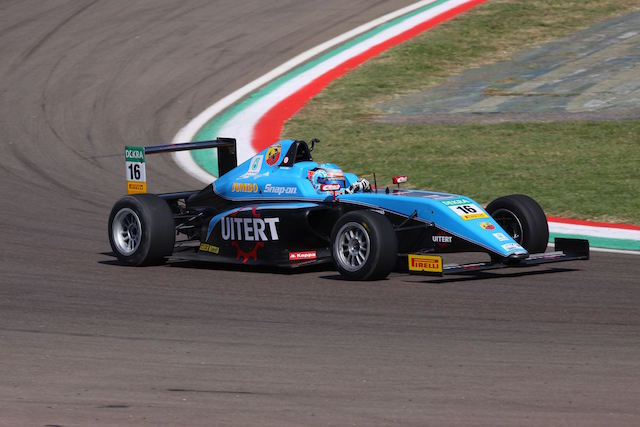 Job van Uitert took another Italian Formula 4 win in race two at Imola, with?Marcos Siebert extending his lead in third after?Mick Schumacher?was crashed out at the first corner by a jump-starting?Diego Bertonelli.

While Siebert retained the lead, Schumacher attempted to follow him through around the outside of Bertonelli but contact was made that spun the German?into the gravel and out of the race.

Siebert meanwhile had run wide, and with Bertonelli escaping his Schumacher clash unharmed, he was able to grab the lead around the outside of Turn 4. It didn’t last however with a drive-through penalty for his jump start.

That gave Siebert a lead with a decent margin – after?Juri Vips lost his front wing in contact with?the Argentine – but that was wiped out when his Jenzer team-mate Giacomo Bianchi spun into the Tamburello gravel, bringing out the safety car.

That provided another team-mate van Uitert – who dropped back from third on the grid with a poor start – the chance to grab the lead at the restart.

Lorenzo Colombo also went on to pass?Siebert?and challenge van Uitert for the win, but as in race one the Dutchman was saved by a late safety car, triggered by Giuliano Raucci and?Diego Ciantini colliding over 10th on the penultimate lap.

Third for Siebert increases his lead over Schumacher from 25 to 40 points, having been only 10 ahead coming into the weekend. He’ll start inside the points on the reverse-grid for race three, with Schumacher at the back.

Juan Correa grabbed fourth place at the safety car restart, and as he ran wide, the man he passed -?Ian Rodriguez – spun, sending?Yifei Ye off track in avoidance.