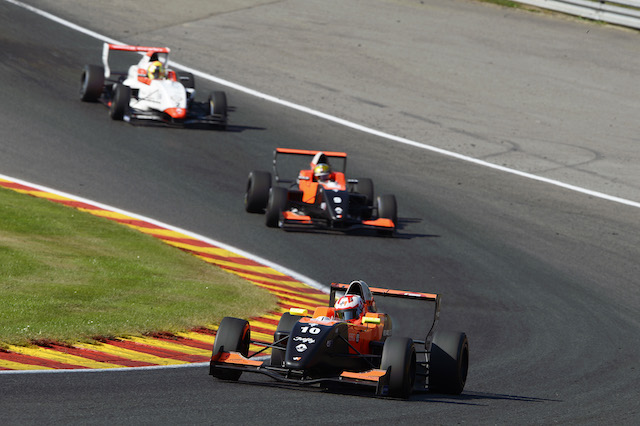 With rival?Max Defourny having to serve a drive-through penalty for a jump start that put him into the lead past Norris, the Brit’s advantage?is now 53.5 points and will wrap up the title with a round to spare if he leads by 50 points at the end of Sunday’s race two.

Belgian Defourny had set the pace at his home circuit on Friday but was only third in qualifying, while Norris narrowly beat?Dorian Boccolacci to a pole that he himself was surprised by.

Defourny’s jump start was significant enough to put him into the lead before Eau Rouge – with the race starting from the alternative ‘sportscar’ grid after La Source.

Norris also came under attack from a fast-starting?Will Palmer and at the entry to Les Combes there was contact between Norris’ rear-right wheel and Palmer’s front wing.

While the latter was forced to pit, Norris seemingly escaped unharmed, but did struggle for pace in the early laps and found himself passed by Tech 1 drivers de Sadeleer and Boccolacci.

From sixth on the grid, de Sadeleer passed one of his team-mates?Sacha Fenestraz into Les Combes for the first time and then steered his way around Boccolacci to grab third, with Palmer off the track.

Having overtaken Norris at the same point a lap later, he closed up to Defourny before the R-ace GP driver served the?penalty for his jump-start.

De Sadeleer, Boccolacci and Norris remained in close formation for most of the remaining laps, but as Boccolacci defended strongly from Norris late on, de Sadeleer was allowed some breathing space as he sealed his first Formula Renault 2.0 win on his 60th start across all series, and only his second podium after?a wet-weather Alps race at Pau in 2014.

Second for Boccolacci keeps him in title contention, 66 points behind Norris.

Monaco winner Sacha Fenestraz?made it a 1-2-4 for Tech 1 after seeing off the team’s fourth driver?Gabriel Aubry in an early battle.

After his penalty, Defourny raced well to take 11th behind team-mate?Julien Falchero, including an impressive threading-the-needle move under braking at the Bus Stop to pass both?Ghislain Cordeel and?Henrique Chaves.

He then gained two more places when?Bruno Baptista and?Alex Perullo made car-braking contact on the run to Eau Rouge after privateer Perullo had just got ahead for 11th place.

With Troitskiy only a wildcard and thus ineligible for points, that was enough to give Defourny one point.

He fared better than?Harrison Scott, who tangled with?Robert Shwartzman as they fought at the bottom of the top 10 and came home last after a change of front wing. Shwartzman parked up at Les Combes with a punctured rear-left tyre.