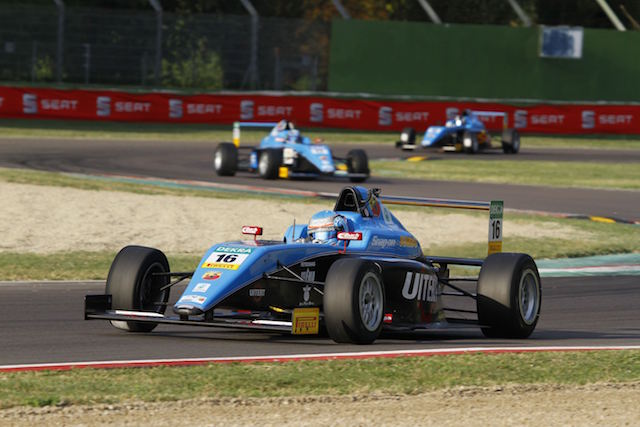 Job van Uitert scored his first Formula 4 victory in the opening race of the penultimate Italian series round at Imola after?Mick Schumacher served a penalty for a jump start.

Schumacher had given himself a chance to close further on the points lead by beating rival?Marcos Siebert to pole, but the Prema driver moved before the lights went out.

While he opened up a lead of five seconds prior to serving his drive-through penalty, Siebert tried to fend off?Juri Vips and?van Uitert for the effective lead.

Vips challenged Siebert at Rivazza at the end of the first lap but ran wide, losing out to van Uitert and?Giuliano Raucci, although the Brazilian would go off twice at Tamburello over the subsequent laps and was forced to pit with a broken front wing.

Van Uitert then took the challenge to Siebert and swept around the outside of his Jenzer team-mate at Tamburello at the start of lap four.

Four laps later, Vips also found a way past Siebert. Van Uitert was by now more than a second up the road, and although?Vips was quickly able to catch the Dutchman, he was unable to make move before a safety car brought an early end to racing.

Siebert finished third to extend his lead over Schumacher from 10 to 25 points, with the German failing to score despite recovering to 13th from the back of the pack.

Siebert?will start from pole ahead of Schumacher for race two after being him by 0.045 seconds in second qualifying on Friday.

Up from ninth on the grid,?Simone Cunati resisted lengthy pressure from?Lorenzo Colombo to be the top Italian finisher in fourth.

Diego Bertonelli?was sixth on the road but a five-second penalty relegated him out of the points, promoting Diego Ciantini to make it three Jenzer drivers in the top six.

Kush Maini?took seventh but may yet be penalised for not responding to a black-and-orange mechanical warning flag that was shown to him – presumably for missing half of his front wing, which while?costing him performance, didn’t appear to be particularly dangerous.

The Indian kept?Marino Sato at bay, while recently-crowned French F4 champion?Yifei Ye beat his Mucke team-mate?Devlin DeFrancesco to ninth, the Canadian throwing himself off into the?Tamburello gravel trap in?his attempt to get back on terms and triggering the late safety car.?Title outsider?Raul Guzman had a quiet run to 10th.