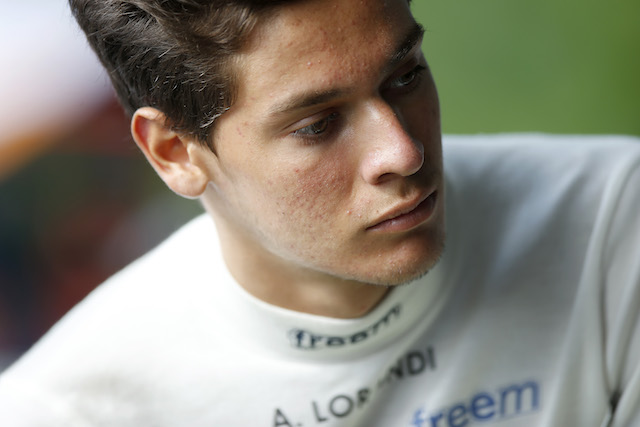 Alessio Lorandi will contest the final two rounds of the GP3 season after calling time on his Formula 3 campaign.

The 18-year-old Italian won the Pau Grand Prix in May but otherwise struggled in his second season in F3 after his step up?from karting, and parted company with the Carlin team prior to the last round at the Nurburgring, which the British squad was then forced to miss.

Lorandi?will race for Jenzer in the GP3 events in Malaysia and Abu Dhabi, driving the team’s #19 entry that began the year in the hands of Richard Gonda and was used by Oscar Tunjo on a one-off return at Spa.

At Jenzer he rejoins his 2015 Van Amersfoort Racing F3 team-mate Arjun Maini, who joined the team after abandoning his own disappointing F3 programme with T-Sport earlier in the season.

“It?s relieving for me to be back behind the wheel of a race car after the early end of my FIA F3 experience,” he said.

“I thank Andreas Jenzer for his enthusiasm and for the trust he placed in me by lining-up a third car for the two final rounds of the GP3 Series.

“It is a really interesting and competitive series featuring some of my previous Formula 3 contenders like [Charles] Leclerc, [Jake] Dennis and [Alex] Albon. In addition, the same team fields my 2015 team-mate Maini.

“There is a whole lot to discover in terms of the car and the Pirelli tires. I will line-up for a learning experience at Sepang, a track that I find particularly challenging and fascinating, and I can?t wait to take my first steps in this championship.”