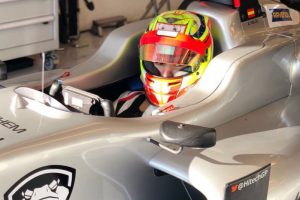 The positions reversed in the afternoon session, with Ahmed taking the top spot by 0.032 seconds.

Aron and Schumacher were third and fourth fastest in the morning, with Shwartzman and Zhou doing the same in the afternoon.

Carlin got a single car into the top 10 with Sacha Fenestraz in seventh, but it was a troublesome day for the team, with its other five cars in 16th, 17th, 19th, 20th and 21st.

Macau Grand Prix winner Dan Ticktum was only the fourth fastest of the six Motopark drivers, but was the man to beat all day in the relatively fast first sector of the track.