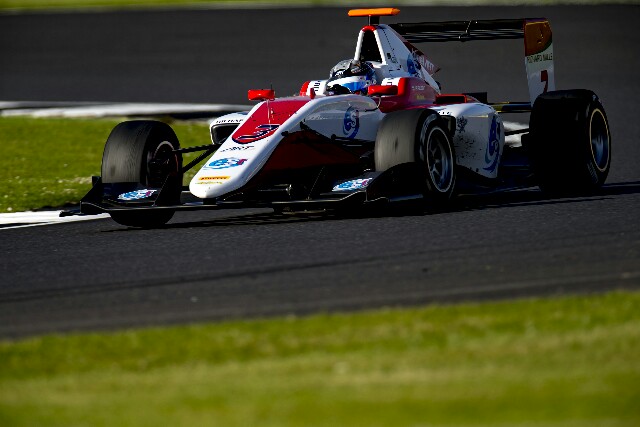 Track conditions were cold and initially dry but moments before the session began, the forecasted rain arrived.

The session was red flagged five minutes into the session as Kevin Jorg binned it at the end of Stowe. Jorg,?like everyone else,?was desperate to set a competitive time on slick tyres but as the drivers took to the track, the conditions only got worse.

Despite the lack of grip, Campos driver?Konstantin Tereshchenko was able to complete his lap the fastest as others had their times deleted for track limits infringements. Albeit, the Russian?was nearly 12 seconds off the pace of the fastest time set in practice.

When the session was restarted, the grid was split between drivers who had changed over to the wet tyres, and those who had stuck to slicks.

However,?since?the rain had passed, the slick tyres were the right option despite some patches of water left on sections of the track.

Lap times began to tumble down into the 1:48s but drivers were still getting their times disallowed for breaching track limits. Jake?Hughes held provisional pole with a time of 1:48.567 before?the mid-session lull, only 0.001 ahead of Antonio Fuoco. Matt Parry popped a time into the 1:47s but had his time removed for track limits.

As the track became busy for the final laps, debutant Arjun Maini briefly took pole position but?Albon?was able to put in a time of 1:47.348, a full second and a half faster than the Indian driver.

Championship leader Leclerc?was on a faster lap but Santino Furrucci?blocked the?Monegasque driver into Club corner and the two collided. Leclerc finished his lap but had to pit due to front wing damage.

Another red flag was brought out for a couple?minutes as Ferrucci stopped out on?track with a rear puncture, but he was able to get his car going again. When the track went green again with 3 minutes left on the clock, the rain had returned which effectively handed?pole position to Albon.

The four bonus points will put the British-born Thai just one point behind ART team-mate Leclerc, who must?serve his five place grid penalty from Austria.

Sandy?Stuvik?would inherit second for an all-Thai front row in a reversal of the top two from Friday practice.

Maini will start third ahead of Matevos Isaakyan, Hughes, Fuoco and Leclerc, with Akash Nandy, Nirei Fukuzumi and race winner last time out Ralph Boschung rounding out the top 10.