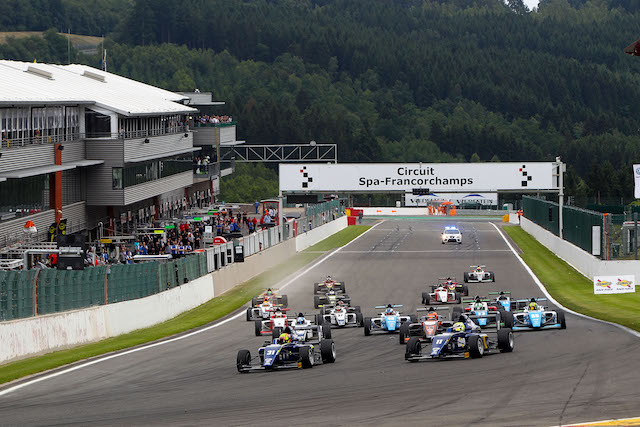 At the restart, Collard briefly passed Norris for the lead out of Eau Rouge before hitting oil and going off track, with Norris and Leist able to relegate him to third.

Collard was also passed by?Enaam Ahmed just before the race was red-flagged for a crash involving?Akhil Rabindra and?Quinlan Lall, sending the latter into a barrel roll and off to hospital, from where he was discharged a few hours later.

The race was not restarted and the result taken from the end of lap five, with Norris the winner ahead of Leist and Collard holding onto third ahead of Ahmed.

Reigning BRDC F4 champion?Will Palmer?had a competitive showing at his first race weekend in the new Tatuus-Cosworth, qualifying third and holding fifth in the race until he was attacked by?Thomas Maxwell.

Toby Sowery managed to pass both drivers to snatch fifth before Maxwell and Palmer came together, sending both to the pits.

Tarun Reddy came through to finish sixth in front of?Ben Hingeley?and?Faisal Al Zubair, with?Thomas Randle – who was closest to Collard in the points prior to the race – having to make do with ninth, followed by?Enzo Bortoleto.