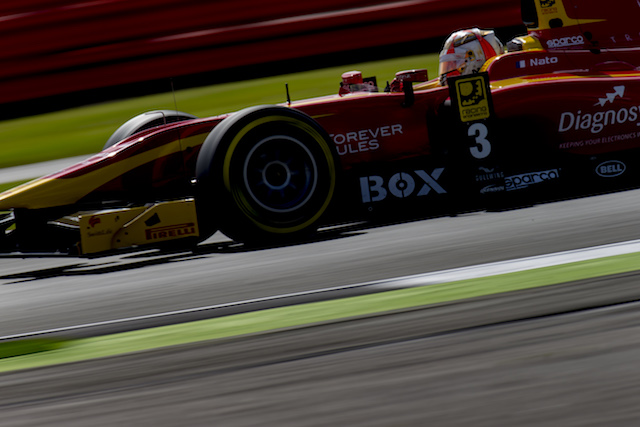 A red flag was indicated as Nato came through the final corner on his way to stealing top spot away from?fellow Frenchman?Pierre Gasly, triggering an investigation to establish whether his lap should be allowed to stand.

The lighting gantry on the pit straight only turned from green to flashing yellow lights after Nato had crossed the line, and he was ultimately allowed to keep hold of pole.

The red flag – caused by?Oliver Rowland?stopping off track in the arena section – prevented?Gasly from being able to immediately respond to Nato’s better lap, and could not take back pole in the few minutes after the session was restarted.

After locking out the podium in the Spielberg sprint race five days ago, it was a pretty bad session for the three British drivers on home soil as French rivals swept the front row.

Jordan King, the winner in Austria, was the quickest of them in eighth, while Rowland ended up 10th after his stoppage.

Alex Lynn?meanwhile had a nightmare, visibly and audibly struggling throughout with?his DAMS car, leaving him to conclude over the radio that there must be a problem with the chassis. He was left languishing down in 17th, 1.7 seconds off the pace.

His team-mate?Nicholas Latifi had no such issues and claimed third ahead of the championship leader?Raffaele Marciello.

Sergey Sirotkin was fifth, but faces exclusion?from the results?after missing a call to the weighbridge when an earlier red flag to recover the stopped car of?Nabil Jeffri brought a premature end to the first runs.

Jagonya Ayam colleagues?Antonio Giovinazzi and?Mitch Evans were sixth and seventh respectively ahead of King, while?Arthur Pic ended up ninth on perhaps his most competitive day of the season so far.

Luca Ghiotto‘s Trident car stopped before he could set a time, just as it had towards the end of practice.