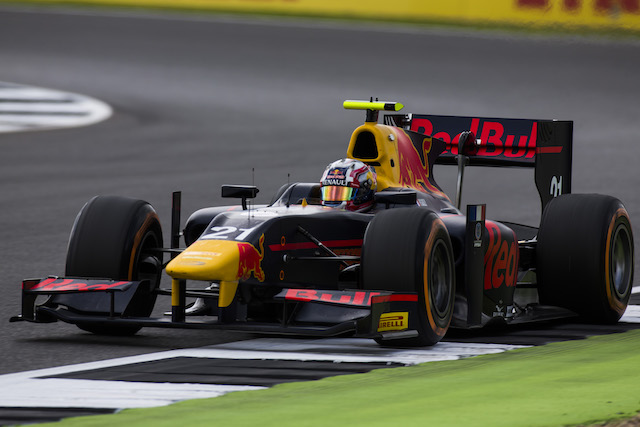 After one?and a half seasons of near misses, the French driver was able to finally string a race together and finish on the top step of the podium, taking his first single seater win since 2013.

Pole sitter Norman?Nato?had made?a brilliant start off the line,?giving himself a huge margin on second place starter Gasly by turn one. Gasly struggled off the line on his soft compound tyres but was able to keep second place from Nicholas Latifi?behind him.

Jordan King, who like his team mate made a fantastic start, was up to fourth by the end of the first lap and was able to overtake Latifi around the outside going into club corner.

When the pit window opened on lap five, everyone who started on the soft tyres pitted for the harder rubber except for Gasly, who would pit a lap later after barely holding off King, releasing the Brit into second position.

With the soft tyre starters pitting, Nato managed the gap back to King who was heading a huge six-car train behind him as the harder tyres started to lose their grip.

With those who had yet to pit settled into their rhythms, it was the likes of Antonio Giovinazzi and Gasly who were on fresh rubber starting to lap three to four seconds faster than the leaders.

As the train behind King?grew longer, it was Artem Markelov who would make a cracking overtake on both Evans and Marciello into stowe corner for fourth position on track. He would then go on to pass Latifi a couple of laps later in that same spot after failing to pass the DAMS driver into Maggots.

Mitch Evans would follow Markelov through on both Raffaele Marciello and Latfi for fourth position not long after.

Marciello pitted on lap 21 and became the first of the hard starters to make his pit stop, with race leader Nato and Latifi following suit a lap later. As he was left out, King was struggling even more and came under huge pressure from Markelov before the Russian driver was once again able to pass into Stowe corner.

King would then pit for the soft tyre as?Evans followed him in, but suffered a slow stop allowing the Kiwi passed during?the pit stops. Markelov made his pitstop a lap later but trouble with the front left tyre spat him out back down in 13th position.

With the pitstops all played out, it was now the Soft tyre starters who were in the better position as Gasly was now leading the race ahead of Oliver Rowland and Giovinazzi with only four laps left to run.

Evans overtook Nato into Stowe for sixth position as the French driver started to struggle on the softer rubber. The Campos driver?would then work his way passed Nobuharu Matsushita and Luca?Ghiotto on the penultimate lap.

With no one coming close to him on track, it was Gasly who took the win by nearly ten seconds from his nearest competitor at the chequered flag.

The battle for second went all the way to the last lap as Giovinazzi made a brilliant move into Woodcote, passing Rowland on the outside and coming very close to taking both him and the Brit out of the race. Fourth place went to Evans, who was followed by Ghiotto in fifth after starting dead last on the track.

Matsushita made a comeback after sitting out the previous round in Baku by running a quiet race for sixth position, followed by Racing Engineering duo Nato and King. Russian Time team mates Marciello and Markelov rounding?out the top 10, with all 24 starters finishing the race.