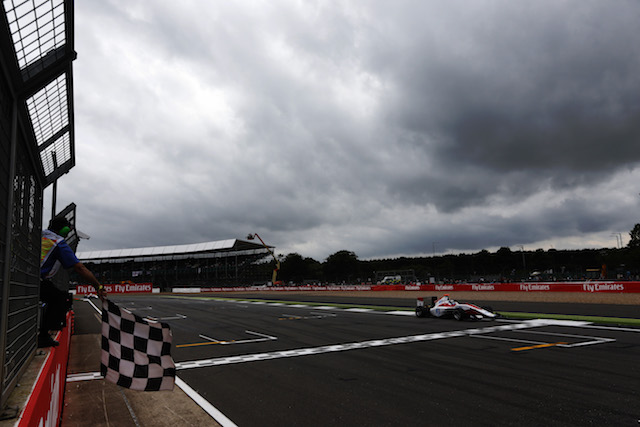 Alex Albon has cruised to a?GP3 race one?win at Silverstone from pole position.

The Thai driver made a beautiful start from pole position and didn’t look back, leading every lap on his way to his second victory of the season. He now takes the championship lead from second place finisher and team mate Charles Leclerc.

Both Albon and Sandy Stuvik got away from the grid with ease as the ex-FIA F3 driver Arjun Maini dropped like a stone from third position. Jake Hughes also made?a bad start from fifth allowing the likes of Antonio Fuoco and Leclerc through into turn one.

Fuoco overtook Matevos Isaakyan around the outside of Luffield to promote himself up into third position behind his team mate. Team mates?Nyck?de Vries and Nirei Fukuzumi?came together coming into Brooklands, with the pair of them losing positions and de Vries being handed a five second time penalty.

Eleventh?place starter Matt Parry was putting on a storm behind the leaders, overtaking Jack Aitken, Jake Dennis and his team mate Ralph Boschung in quick succession to put himself up into seventh.

Not able to keep up with his fellow countryman, Stuvik started to struggle heavily with his tyres and was a sitting duck when Fuoco, Leclerc and Hughes came up behind him.

Leclerc then caught and?attempted an?overtake on Fuoco around the outside of Stowe corner, but he got forced out wide off the track?by?the Italian driver. Keeping his foot in, Leclerc came back onto the track at Vale on the inside of the track and made a decisive move for second position.

Isaakyan was the next to try and overtake?the struggling Stuvik, but with the pair fighting for position, Parry arrived onto the back of them and overtook his team mate?into the Maggots-Becketts-Chapel complex. Parry then dived down the inside of Stuvik into turn two for fourth position.

Around this time both Hughes and Isaakyan suffered structural failures to their cars, with Hughes rear wing seemingly letting go for no reason and the Russians right wing mirror falling off. This forced the pair of them into?the pit with the?Hughes retiring while Isaakyan continued, albeit way down the field.

Leclerc managed to bring the gap down to his team mate under two seconds but Albon was pacing himself all the way to the finish line to take his first feature race win. Third place went to Fuoco with?Parry?following behind in fourth.

Despite his earlier penalty, de Vries finished in fifth position ahead of Boschung, with both?Artur Janosz and Dennis able to pass Stuvik on the final few laps for seventh and eighth respectively. With other cars failing around him, Maini picked up the final points paying position in tenth.