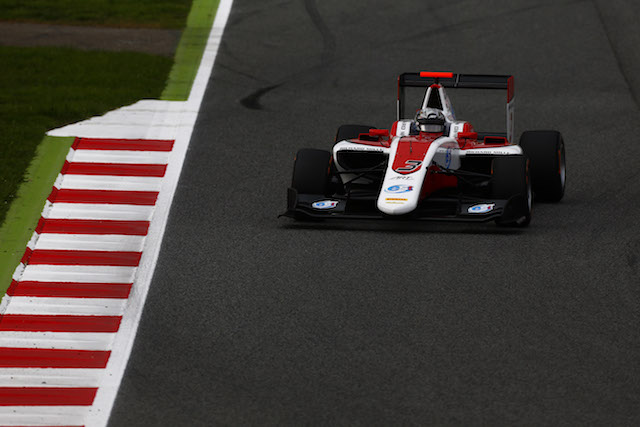 Alex Albon?took victory in race two of the opening round of the GP3 season at Barcelona, claiming the second win of the weekend for a fast-starting ART Grand Prix driver.

Albon repeated team-mate?Charles Leclerc‘s trick from race one of flying from third on the grid to take the lead, although the British-born Thai had to hold on around the outside of pole-sitter?Oscar Tunjo at Turn 1 in order to complete the move.

Albon and Tunjo pulled away from the rest of the field and remained fairly close to each other during the race, but Albon managed to twice gap?his former Lotus F1 Junior stablemate, finishing 1.2 seconds clear for just the second win of his single-seater career.

Antonio Fuoco made another fast start to go from fifth to third at the start, but once again?he lacked the race pace to keep with the leaders, trailing home six seconds behind Tunjo.

Jake Dennis lost ground from a front-row start and though he caught Fuoco at the end, he had to settle for fourth.

Nyck de Vries salvaged something from an otherwise disappointing debut weekend, climbing from ninth to fifth on the first lap. He held off?Matevos Isaakyan, who had?an even more impressive first lap to go from 11th to sixth.

DAMS drivers?Kevin Jorg and?Jake Hughes remained pretty inseparable in seventh and eighth, with Leclerc failing to score in ninth after falling to 10th with a not-so-great start before re-passing?Ralph Boschung early on. The Monegasque driver remains the championship leader, though.

The most eventful moment of the race was an overly aggressive defence from?Matt Parry of 11th place at the start of lap two, forcing?Santino Ferrucci into the pit exit. The Welshman, who conceded?the place anyway shortly afterwards, was given a 10-second penalty for changing direction more than three times down the straight, relegating him to 20th.