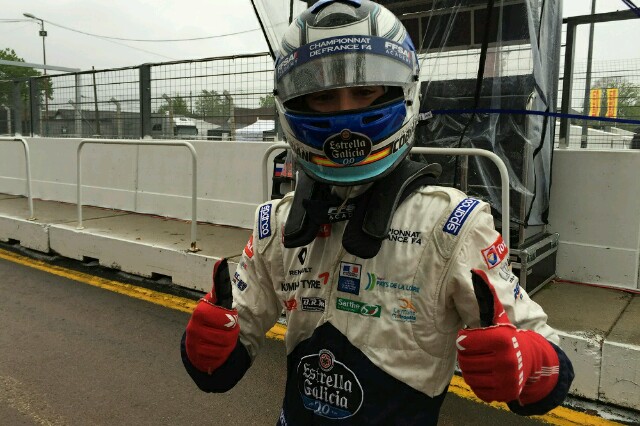 Ye did start the first race from pole after topping qualifying by over seven tenths, but in wet conditions he dropped to third off the start, swapping places with Cobian, with Michael Benyahia staying second.

Spanish driver Cobian, celebrating his 18th birthday, held the lead until the end, even though Benyahia finished just a quarter of a second behind.

Tristan Charpentier took eighth ahead of series returnee Kami Laliberte, who survived race-ending contact for Enzo Samon, who was given a grid penalty for the clash that also took out Marvin Klein and Coicaud.

As a result, Coicaud started 15th for race two, promoted off last place only by Samon’s penalty.

He was the last of 11 drivers that took the restart following a first-lap pile-up triggered by contact between Rougier and Laliberte that sent the latter spinning. The Canadian was eliminated together with Cobian, Jean-Baptiste Mela, Jose Sierra and Samon.

Charpentier led at first ahead of Chavalier before the letter got ahead, but they would be forced out of contention by throttle and gearbox issues respectively.

Coicaud therefore took over the lead with three laps to go, having benefitted from mistakes and problems for others while working his way up the order.

He finished three tenths ahead of Magnus, with Jean completing the podium.

Ye and Rougier survived a coming together to finish fourth and sixth, either side of Casper Roes.

Aleks Karkosik took seventh with Chevalier was the final finisher in eighth, a lap down after visiting the pits with his gearbox problem.