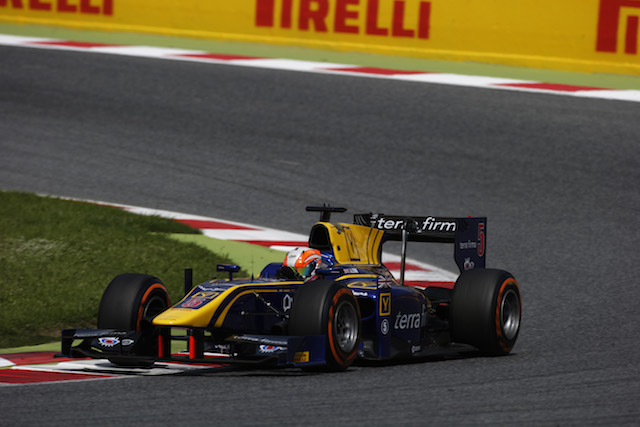 Alex Lynn?has taken victory in the GP2 sprint race in Barcelona for the second year running.

The DAMS driver?climbed from third to second on the first lap, capitalising on a tussle between front row starters?Raffaele Marciello and?Jordan King ahead of him. There was slight contact between the pair at Turn 2 and Lynn was able to go around the outside of King at Turn 3.

Marciello led by 0.6 seconds at the end of lap two, but Lynn set the fastest lap on the next time around and had use of the DRS to pass the Russian Time driver down the inside of Turn 1.

Former team-mate?Pierre Gasly would become Lynn’s toughest challenger after charging his way from sixth to second but he couldn’t get the gap lower than around 1.5s before a safety car towards the end of the race following a big crash for his Prema team-mate?Antonio Giovinazzi.

Giovinazzi was squeezed when trying to pass his long-time team-mate and friend?Sean Gelael into Turn 10, and contact between them ripped?off?the Italian’s front-right wheel.?Giovinazzi headed into the barriers at high speed, clipping?Arthur Pic into a race-ending spin on his way.

Giovinazzi took a while?to get out of his car, and the race ended under safety car while he received medical attention.

Gustav?Malja?took a second 10th place finish from the weekend ahead of?Sergey Sirotkin, who had a decent race from the back of the grid following his feature race spin, getting up into 11th past Pic just before the Frenchman was eliminated.