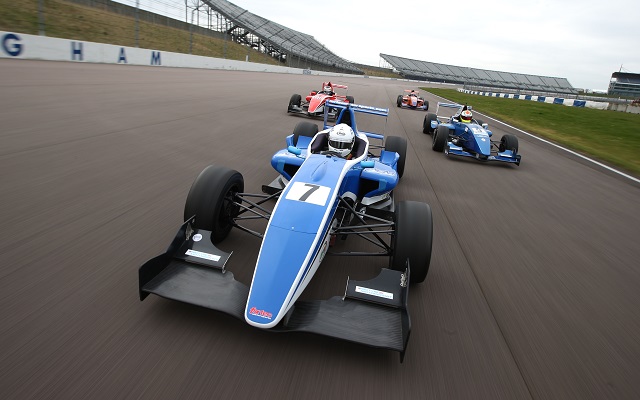 The 2013 Protyre Formula Renault season provided solid racing with some great young talents looking to move up the ladder. The majority of the field graduated to other series, with reigning champion Chris Middlehurst moving to BRDC F4 and runner-up Weiron Tan joining German F3.

Despite the strong competition BRDC F4 and British Formula Ford represent on the United Kingdom entry-level scene, Protyre Formula Renault still managed to assemble a decent 2014 grid of 14 drivers. As the championship starts this weekend, we take a look at the 2014 class. 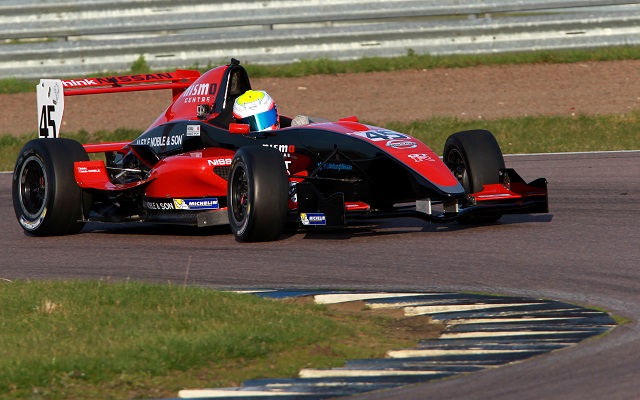 Defending champions MGR Motorsport will try to repeat their strong start from last year, when they won all but one race during the first half of the season. They are set to enter the 2014 season with a four-car lineup, which will see them field the most cars of any team at the opener.

Grandson of F1 World Champion Emerson,?Pietro Fittipaldi will begin the season as one of the title favorites. Fittipaldi topped the pre-season testing and is one of the is one of the few drivers in the field who already have a year of experience with the car under his belt.

He will be joined by another returnee, Matteo Ferrer, who had a hectic but somewhat promising rookie season in 2013, where he took a best finish of fifth.

The final addition to the team is 16-year-old Tarun Reddy, a former Force India F1 Academy member, who will make his debut on the UK racing scene. The Indian driver, managed by MRF champion Rupert Svendsen-Cook, already gained some single-seater experience with race wins in the MRF1600 series. 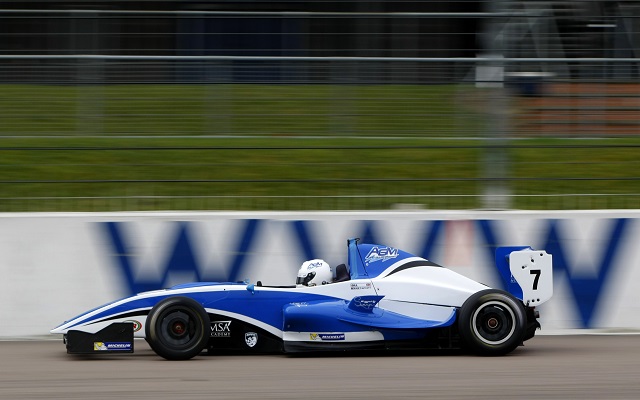 Probably the biggest name in Formula Renault 2.0 at this point in time, British team Fortec will field at least two full-timers in the series and have also confirmed a guest entrant. Alex Gill, 2012 British KF3 karting champion, will make his full time single-seater debut in the series, having participated in the final round of the championship last year as well as the Autumn Cup. The youngster has serious potential and is mentored by big names – Red Bull Racing’s Adrian Newey and Grand Prix promoter Martin Whitaker. As a karting graduate, Gill might need some time to get comfortable with the car, but he’s definitely going to be at the front sooner or later this year.

Gill’s teammate is Wolfgang Reip,?who, similarly to GP3 newcomer Jann Mardenborough, is a Nissan GT Academy winner. The 27-year-old Belgian spent the last season in the FIA GT Series and finished fifth in the Pro-Am category. This weekend will be Reip’s first in single-seaters, while he is also set to race in the Le Mans 24 Hours with Nissan’s ZEOD concept.

The third member of the team for the opener is 2013 Winter Series champion Ben Barnicoat. The highly-rated Racing Steps Foundation-backed karting graduate will only race in the first round of the series for now, in order to prepare to his main campaign in Formula Renault NEC. 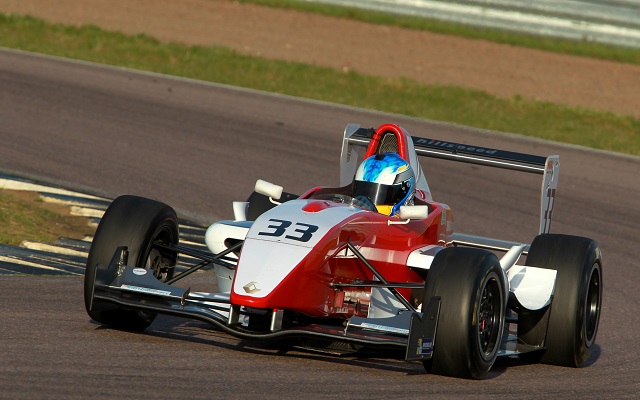 A prestigious team in Protyre, Hillspeed were the only outfit that were able to compete against the Fortec and MGR cars last season. They start 2014 with a solo car entry, with 31-year-old Dimitris Papanastasiou. Racing in Formula Palmer Audi five years ago, and participating in the BRDC F4 Winter Series last year, the Greek driver does not have much experience in single-seaters and his year will be as much about learning, as for the other, younger racers. 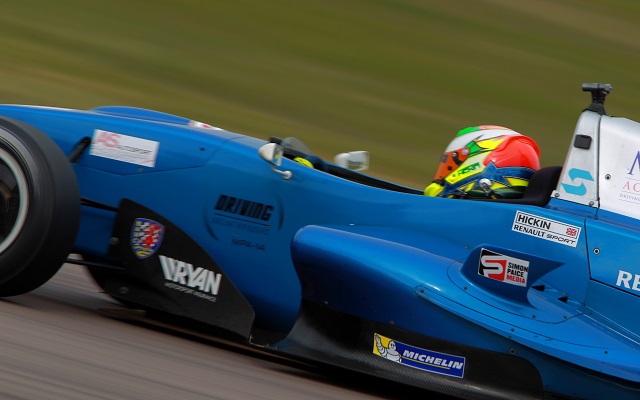 Another squad with one driver, Scorpio Motorsport will focus their resources on Piers Hickin?in the opening round of the championship. The 16-year-old youngster, just like Gill, made his single-seater debut at the end of last season. The lack of teammates and experience might hurt his goal, however, Hickin showed promising pace in the pre-season testing as he was only 0.03s off Fittipaldi’s time. 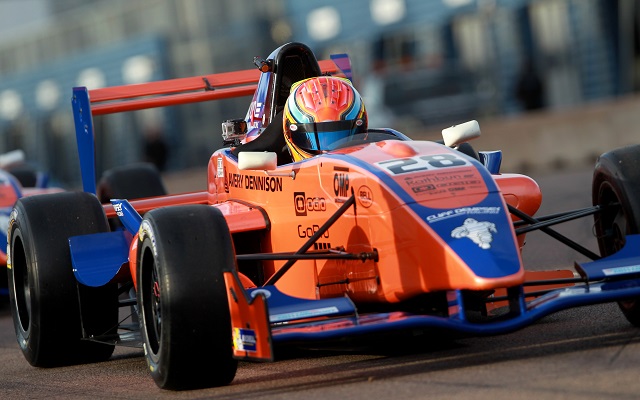 Relatively new to the series, Cliff Dempsey Racing only participated with part-time entries in recent years, like with Jesse Anttila in 2013. They start the new season with two drivers, both of them coming over from North America to make their UK racing debut. American TJ Fischer will begin 2014 with an extremely successful year behind him as he won Formula Car Challenge National and Western titles and he was also SCCA Majors Western champion.

20-year-old Fischer, whose goal is to end up in IndyCar eventually, will be joined by Canadian Patrick Dussault, also 20, who is graduating from Skip Barber Summer Series. Their lack of experience in UK racing seemed to be evident in the pre-season testing, and they might need a couple of races to get into shape. 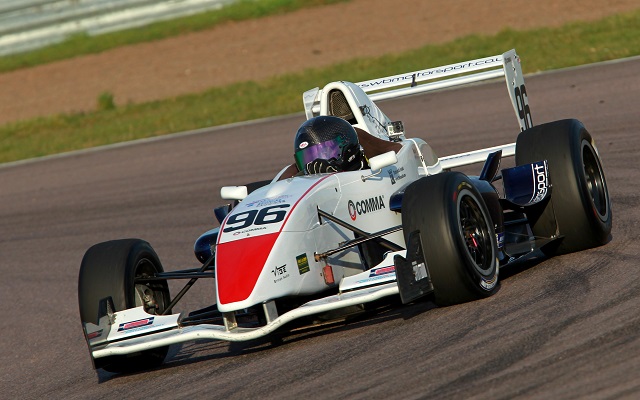 Similarly to Cliff Dempsey Racing, SWB are also another squad that are expanding to a two-car team. Atte Lehtonen will continue his cooperation with them after making two guest appearances in the series in 2013. Lehtonen started his career in 2011 and ended up as the best rookie in Finnish Formula Ford.

His teammate will be Jack Butel, the third British karting graduate of the grid. Butel started his career only in 2010, at the age of 14, but he was already collecting titles in the next two years. As the majority of the grid is made up of rookies, both Lehtonen and Butel can deliver right from the beginning, however, it wouldn’t be surprising to see them struggle at the beginning, considering the lack of experience they and their team have.

18-year-old Niklas Tiihonen will race as a privateer under the banner of Circulation Motorsport throughout the season. Tiihonen, who is another karting graduate, finished a successful career last year with a Finnish and CIK-FIA Academy title in 2010.