written by Aditya Banerjee 7 May 2014 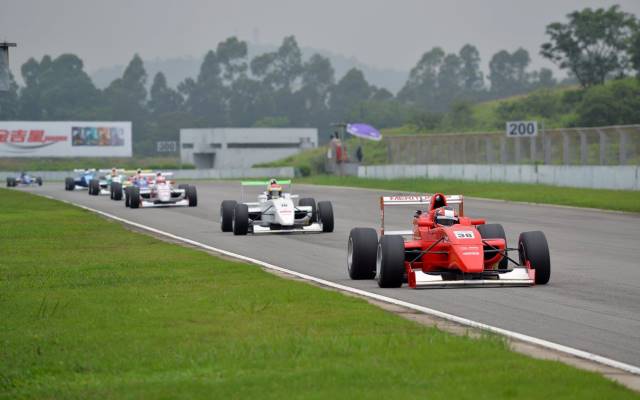 Formula Masters China continues to be one of the top Asian single-seater championships and has a pretty stellar record of developing talent – its champions?Matheo Tuscher and?Antonio Giovinazzi have gone on to be race winners in competitive European championships.

2013 saw a close fight for the championship between?Aidan Wright and Afiq Ikhwan,?with the former prevailing in the last race amidst penalties, scandals and intrigue. The Australian has since gone on to land a drive in the Audi R8 LMS Cup.

2014 promises to be a riveting season with a grid comprised of a host of talented newcomers and returning drivers, amounting to a total of 18 competitors from Asia, Europe, Australia and Africa. As always, the series will see races held on Asian tracks, with visits to the likes of Sepang and Shanghai. The rise of the Meritus-backed Formula BMW AsiaCup series has proved to be a fillip in finding new talents.

Below, PaddockScout takes a look at the drivers who will contest Formula Masters China in 2014.

Defending champions Meritus finished 1-2 in the drivers’ championship in 2013, and the Malaysian team will be looking to continue their winning ways in 2014. All three of their drivers are graduating from the AsiaCup series.

Leading their charge is South African driver?Aston Hare.?The 18-year-old won the JK Racing Asia Series in 2012, but a move to German F3 with EuroInternational failed to continue beyond the first round, leaving Hare looking for other options. He switched focus to the AsiaCup series Super 6 held at Sepang in December.

There, Hare won three races and finished on the podium twice more, but lost out on the title by a point to Arjun Maini.?His?experience in the Asian single-seater scene, coupled with Meritus’s strong track record and the fact that he knows the team from the AsiaCup series, makes him one of the clear title contenders.

Andersen Martono?stays with Meritus for a full season in 2014, having done two rounds with them in 2013 at Inje and Sepang. The 17-year-old from Singapore did a full season in the AsiaCup series, finishing in sixth place, and was fifth overall in the Super 6 event. Martono should be aiming for regular points’ finishes and the occasional podium in 2014.

Mandla Mdakane?completes the trio of Meritus drivers. The 20-year old South African driver finished ninth in the AsiaCup series, albeit having missed a round. He began the year nursing a fractured thumb, but was fit enough to test at Sepang in April. Finishing in the points should be the Mdakane’s focus given that he embarks on his rookie season in the series. 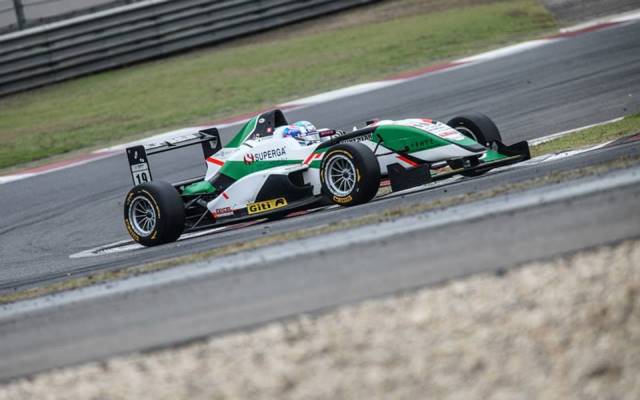 The Phillipines-based team, champions in 2012 with Antonio Giovinazzi, finished second in the teams’ standings in 2013. For 2014, Eurasia have employed a full four-car lineup from the outset, keeping two of their drivers from last year.

Hong Kong driver?Matthew Solomon?continues with the team in 2014.?The 18-year-old was the top rookie in the championship last year, finishing in fifth, one point behind fourth-placed Ren Nagabuchi in the standings. Solomon showed stellar consistency in 2013, finishing in the the top?eight in all the races of the season. He also had a points’ finish at a one-off appearance in the Formula Renault 2.0 Alps with Prema at Misano. Solomon should be able to challenge for wins and might be a championship contender. He will also participate in the Audi R8 LMS Cup in 2014, having already won a GT race last year with none other than Mika Hakkinen as co-driver.

Kevin Pu Jun Jin?is another driver to be retained by Eurasia for a second season. The Chinese driver finished eighth in the series last year, and topped the China Driver Class. He also had a decent showing in his single outing in the Asian Le Mans series with Craft Racing Team, finishing on the podium. He should be fighting for points and podiums in 2014.

Bo Yuan switches to Eurasia after having participated with the Star Racing Team last year, finishing a place behind Pu Jun Jin in the series standings. Bo, a member of the Star Junior Racing Academy, also raced in the Asian Formula Renault season, taking two wins. Like his compatriot, he should be aiming to be a regular feature in the top-10 and visit the podium more often in 2014.

Eurasia’s four-car lineup is completed by?Sean Hudspeth.?The 20-year-old from Singapore had last participated in the final round of the 2012 Formula Pilota China series, taking a best finish of seventh. Finishing in the points should be the main target for him in 2014. 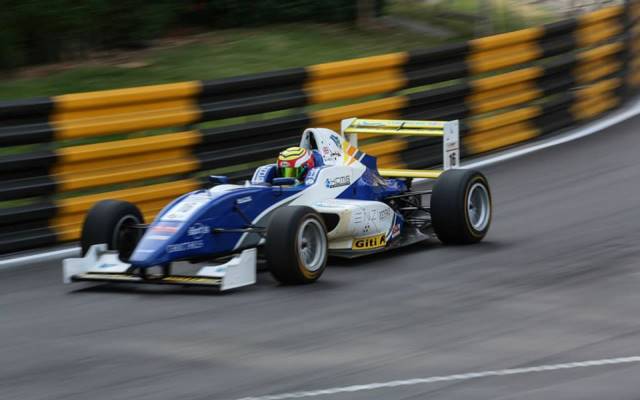 The Hong Kong-based team finished third in both the teams’ and drivers’ standings with Akash Nandy. For 2014, KCMG have employed a strong trio of drivers , all of whom could be fighting for wins.

Their 2014 lineup is led by?Dan Wells.?The 22-year-old Briton had previously driven for the team in the 2012 Formula Pilota China season, finishing runner-up to Giovinazzi. Wells also participated in the last round of the series last year with KCMG at Shanghai and clinched a second place finish in the non-championship finale at Macau. His experience and previous success undoubtedly make him one of the championship favourites.

James Munro?joins the series after strong campaigns in his native New Zealand. The 17-year-old dominated the New Zealand Formula Ford championship last year in his first season in cars. In the off-season, he switched to the Toyota Racing Series and had a strong season, finishing seventh with a win at Timaru, despite the presence of several experienced international drivers. Unlike Wells, he lacks racing experience on Asian tracks, but if he can translate the ability he showed back home, he should still be a contender for wins, and a championship challenge cannot be ruled out.

Matthew Swanepoel?completes KCMG’s three-car lineup. The 19-year-old from South Africa, who has a strong record in national karting championships, won the inaugural Formula BMW AsiaCup series in 2013. Swanepoel has extensively raced only at Sepang among all the tracks in the series this year, but he should still be at the sharp end of the grid this year.

Chinese team Zen Motorsport, who have former F1 driver Vitantonio Liuzzi and former GP3 podium-finisher Andrea Caldarelli as team managers, are embarking on their first season in the Formula Masters China series season. The team have have a four-car lineup, three of which will be piloted by sophomores.

Ronald Wu joins the team after having finished 10th in 2013 with KCMG, despite missing the last two rounds. The 20-year-old from Hong Kong had also participated in a round of the Asian Formula Renault championship, taking pole position and a pair of third-place finishes. Wu will be aiming to move up in the standings this year.

Yin Hai Tao?switches to Zen from the Super License squad for 2014. The 27-year-old Chinese driver finished one place behind Wu in the standings last year. ?Like Wu, his aim for this season should be to try and improve on his-11th place finish in 2013, and aim for regular points finishes.

Bao Jin Long is the third sophomore driver in the team. A member of the Star Junior Racing programme, the 27-year-old from China finished behind Wu and Yin in the series last year with the Star Racing Team. Bao will dovetail his FMCS campaign with a drive in the Porsche Carrera Cup Asia. The sheer stamina required for a double campaign might present a challenge, but he should be able to fight for points in FMCS.

The fourth driver in Zen’s lineup is rookie driver?Miao Hua. The Chinese driver is also a member of ?the Star Junior Racing Team, and is stepping up from the karting scene, where he was a champion in the national series last year. In a grid full of sophomore drivers and strong rookies with experience in cars, Miao might struggle, but fighting for points is a possibility.

Humpuss Junior Racing Team are another new team who will join the fray this year. The Indonesian team will be supported by Eurasia Motorsport in the coming season, and have confirmed two local drivers for 2014.

Yasuo Senna Iriawan joins the team after finishing 12th in the AsiaCup series in 2013 and third in the Indonesian Trophy class. The Indonesian driver, who was previously a runner-up in the Asian Karting Open in 2011, will be looking to make an impression in his rookie season in the series with consistent results.

Joining Iriawan in the team is?Darma Hutomo.?Like his compatriot, Hutomo participated in the AsiaCup series in 2013, finishing 14th overall and fourth in the Indonesian Trophy class. He’ll want to fight for the occasional points finish in what will be a learning year.

Indian team Meco Motorsports continue their custom of fielding one national driver in the Formula Masters China series. Last year, they started well, with Raj Bharath taking pole position for them in the first race, but they couldn’t keep up the same level of performances for the whole season.

17-year-old?Akhil Rabindra?joins the team after finishing fourth in the national-level JK Tyre championship in 2013. Rabindra was also selected in FIA Institute’s?2013-14 Young Driver Excellence Academy, as the sole representative from the South Asia-Pacific region. He had previously been a finalist in Force India’s ‘One From A Billion’ talent hunt. Meco were thereabouts in 2012 and 2013 with Raj Bharath, but in a stronger field, finishing in the top 10 overall should be Rabindra’s main aim.

Japanese squad Super License took fourth place in the teams’ championship, as well as the driver’s ?standings with Ren Nagabuchi. The team, co-owned by former F1 driver Ukyo Katayama, have scaled down to just one entry in 2014.

Japanese driver?Yuja Motojima will?embark on his rookie season in the series in 2014. The 23-year-old has participated in junior categories in Japan previously, finishing fourth in Formula Challenge Japan in 2010. Point finishes should be Motojima’s main aim for the 2014 season, although his experience suggests he could be capable of getting the occasional surprise result in.

Ellinas to make GP2 debut with MP in Barcelona