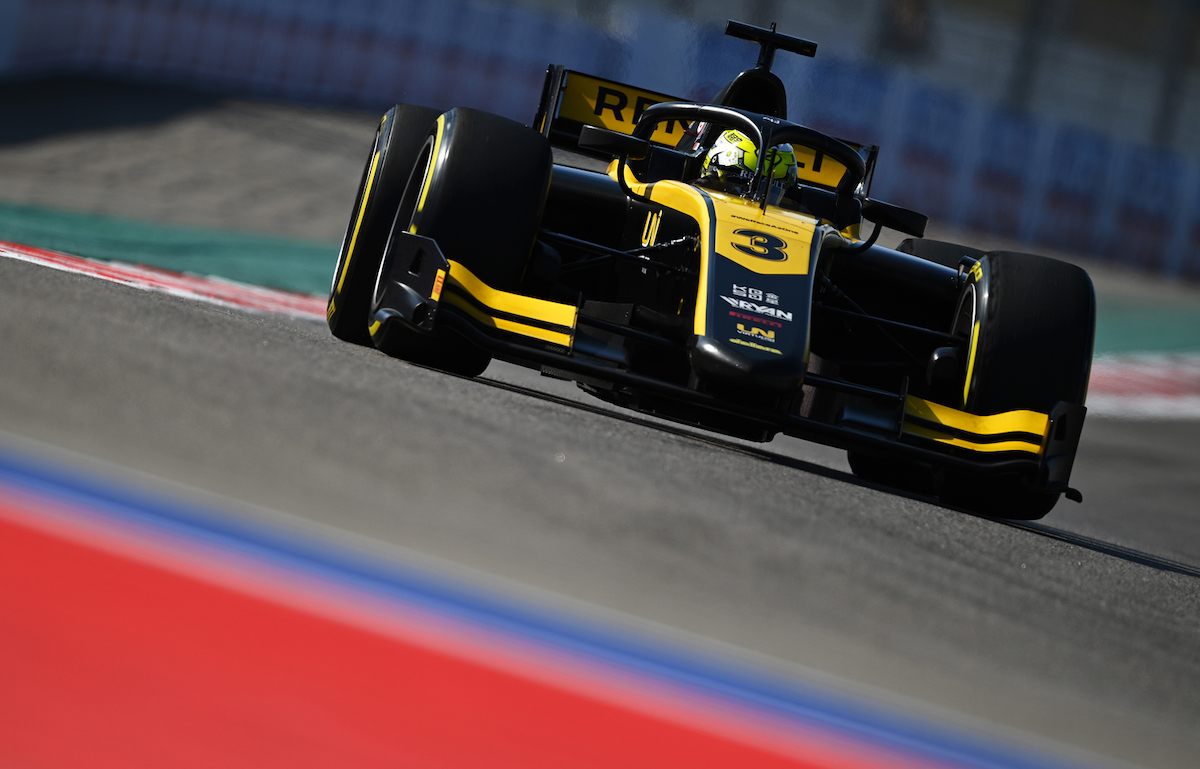 Guanyu Zhou was awarded his first Formula 2 win after the Sochi sprint race was cut short by a huge accident involving Jack Aitken and Luca Ghiotto.

Aitken and Ghiotto collided as they ran side-by-side through the very long Turn 3 fighting over fourth position.

Both cars went into the tecpro barriers on the outside at high speed, Ghiotto hitting them particularly hard after his car was sent into the air by the wheel-to-wheel contact. Both drivers were able to climb out of their cars unhurt – Ghiotto doing so before his car began to set alight.

Under red flag, track workers began to repair the considerable damage to the barriers overseen by Formula 1 race director Michael Masi, but around 20 minutes after the initial crash it was announced that the race would not be restarted.

Nikita Mazepin made a poor getaway from second place, but did at least recover third place on the inside line at Turn 2, with championship leader Mick Schumacher following him through into fourth.

Mazepin then overtook Aitken for second on lap two before the virtual safety car was deployed to retrieve the car of Guilherme Samaia who tangled with Jake Hughes on the opening lap.

After the restart Aitken was demoted further by Schumacher at the penultimate corner, but then managed to fend off Jehan Daruvala – who took the run-off at Turn 2 in the process and didn’t follow the correct rejoining procedure, copping himself a five-second time penalty.

Ghiotto managed to get past Daruvala at that point, and went on to get down the inside of Aitken at Turn 2 on lap seven. Aitken cut back on the inside of Turn 3 on the exit but – having received a puncture from minor contact – he gradually drifted towards the outside before the contact with Ghiotto was made.

Just before the crash, Mazepin had closed right up to Zhou for the lead under braking for Turn 2 but hadn’t been close enough to try for a move.

Third for Schumacher will extend his championship lead over Callum Ilott, who attempted to pass Ghiotto for sixth on lap four but found himself overtaken by Yuki Tsunoda instead.

With the results taken back to the end of lap five, Aitken and Ghiotto are classified fourth and fifth. Tsunoda takes sixth ahead of Ilott and Dan Ticktum with Pedro Piquet ninth and Robert Shwartzman concluding a point-less weekend in 10th.