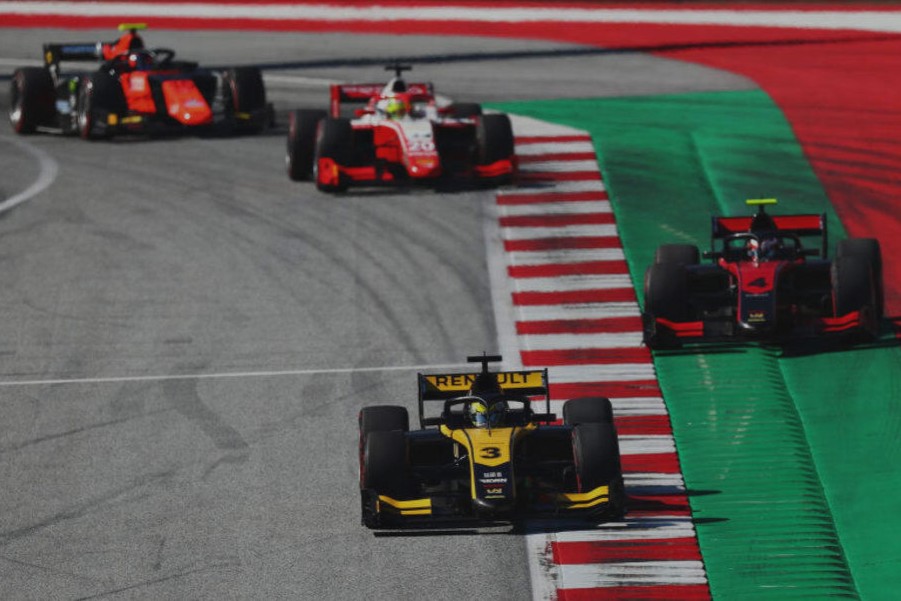 Guanyu Zhou has described how he held on to a podium in Formula 2’s feature race at the Styrian Grand Prix after his set-up compromised him on a drying track.

The race was delayed due to torrential rain, and there were several formation laps behind the safety car before a lengthy red flag and then a proper start in the wet with Carlin’s Yuki Tsunoda and Virtuosi driver Zhou on the front row.

After initially keeping with Tsunoda, Renault junior Zhou ended up battling with team-mate Callum Ilott as the circuit started to dry, and just held off Prema’s Mick Schumacher at the end of the race to secure his first podium of the season.

“It was probably one of the hardest F2 races I’ve done,” said Zhou.

“Obviously starting well, I think me, Callum and Yuki were quite fast in the full-wet conditions. Our car was more towards a wet set-up, so when the track started drying up, we were struggling with the tyres and we had to pit a bit earlier than the others.”

The top runners pitted out of sync, and Zhou was in second place behind Prema’s Robert Shwartzman once the stops had played out and the track had dried. He was then passed by late-to-pit Tsunoda, and finished 18s adrift.

“When I did the fastest lap after [pitting], straight away I felt the rear wasn’t there, from when the track having the dry racing line. Couldn’t really fight with these two guys [winner Shwartzman and Tsunoda]. Tried my best and realised that it’s all about keeping the tyres a bit more smooth or cooler just to be [able to] maybe get a good position for the end.

“I think I did a pretty good job on the tyre management, because how much I was struggling with the rear tyre: it was really tough out there, I was snappy all the time, especially at high speed.

“When I saw the other Prema of Mick was coming, that was really getting close. He got past Callum quite quickly, which wasn’t ideal for me, and in the last lap, I had to be quite smart with all my defending to get the car stopped on exits, because of the poor traction I had.

“In the end, I’m happy with a podium.I think we maximised everything we could do today.”

Zhou’s podium brings him up eighth in the points, with fifth for team-mate Ilott dropping him behind Shwartzman at the top of the standings. The pair may have both been on the podium had the track remained wet.

“[We] never thought it would dry so quickly out there because when we went out after the safety car the track was still pretty wet and it was really hard to see, even though I was the second car out there,” explained Zhou.

“The track dried out really quickly, I was really surprised. The set-up just wasn’t meant to be for these dry conditions.”