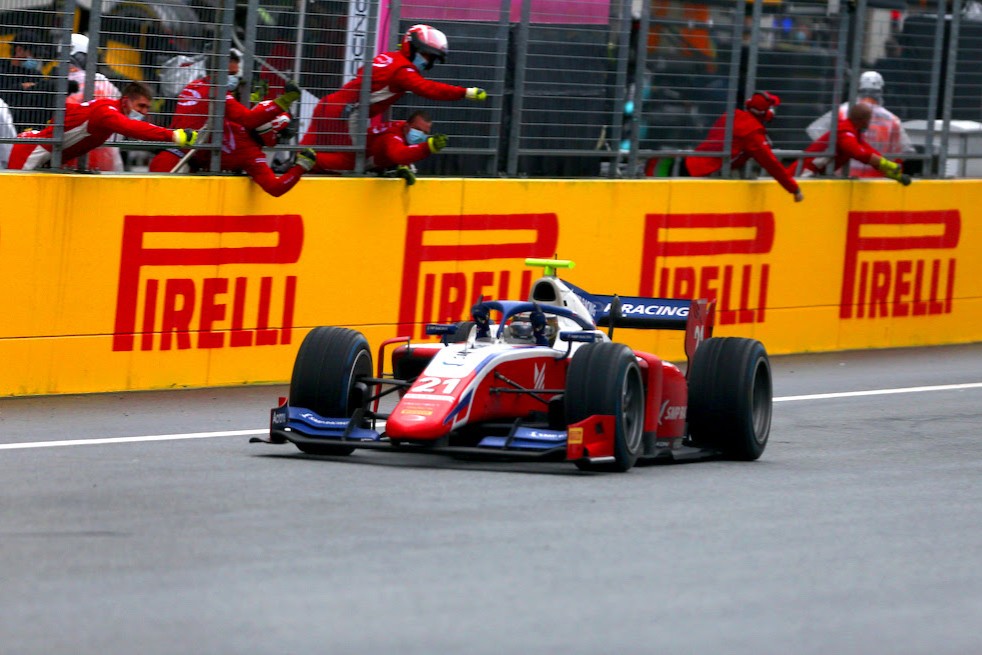 Robert Shwartzman admitted he was ‘saved’ by the timing of the red flag prior to claiming his maiden Formula 2 race win at the Red Bull Ring.

Ferrari junior Shwartzman repelled a late charge from long-time leader and poleman Yuki Tsunoda, who pitted later, to earn victory from sixth on the grid in the wet-to-dry feature race.

The grid initially ran several formation laps behind the safety car in the rain, following a delay for Formula 1 qualifying to take place, during which Shwartzman’s car entered a safety mode that caused him to temporarily slow down.

Rather than the race then starting, drivers returned to the pits under red flag conditions and remained there for around 45 minutes. Due to his issue, Shwartzman had dropped down the queue, but was able to reclaim his starting position.

“It was quite challenging because on the formation laps I couldn’t do anything with the car,” Shwartzman said. “I was really scared and at one point I was ‘ah, we’re not going anywhere’.

“The situation with too much rain and the red flag saved me otherwise I couldn’t continue in the race. When I was in the pitlane already they told me either I’m going to pass to my position behind the safety car, or they’re going to push me down the pitlane, so I knew I was going to restart in sixth.”

Some of Ferrari’s F1 crew were sending encouragement to Shwartzman while he sat next to them in pitlane.

The Prema driver jumped Carlin rival Tsunoda in the pitstop phase to take the lead in the final third of the race, after making early progress up the order, then managed his tyres as the Red Bull junior closed in after his pitstop. There were no further signs of his technical issue.

“The pitstop and the strategy were mega, so big thanks to the team. We changed the tyres quickly, and I exited the pitlane behind [Guanyu] Zhou. Then we had quite an interesting fight.

“I didn’t know where [leader] Yuki was, so my target was just Zhou. I saw him struggling quite a lot with the grip because it started to get drier. We had quite a close move, but I managed to get across Zhou on the exit [of Turn 4].”

Virtuosi Racing’s Zhou had gone for a set-up that was better optimised for the wet, and left him exposed as the track dried.

“After that, I was in front, I had no one in front of me so I tried to push, and then Yuki was behind. I heard from my engineer that he was really, really quick, so I tried to pick up the pace as much as I could but at that point, I was also struggling quite a bit with the rear tyres, with the degradation.

“In the end, Yuki caught me, it was really close, and I managed to save the first place. I’m really happy, I’ve run out of words, and big thanks to the team and my father as well.”