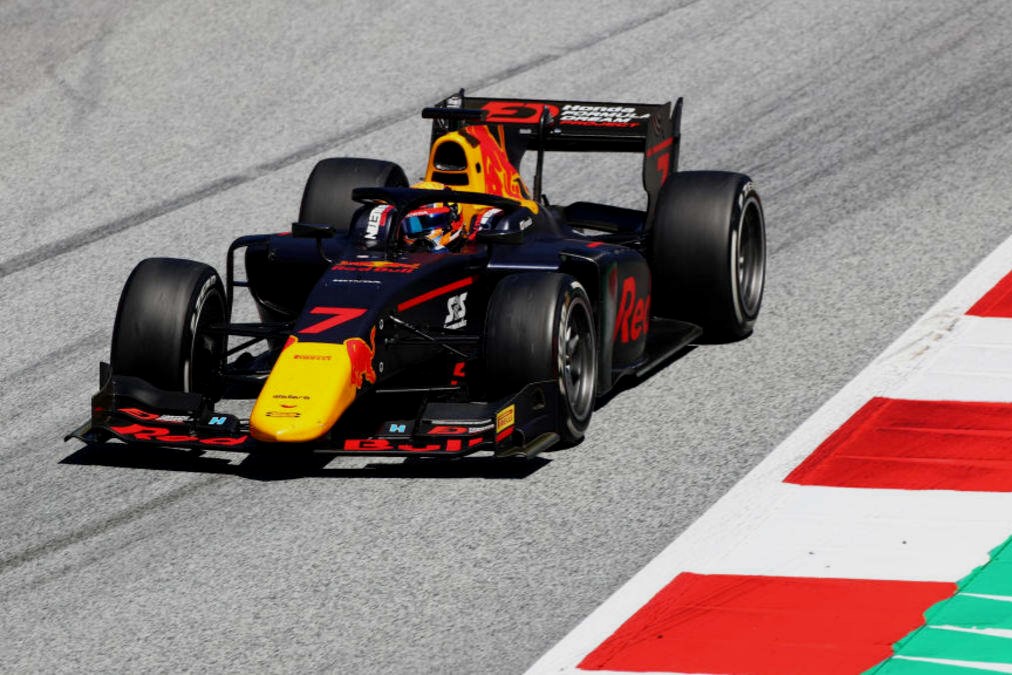 Honda junior Yuki Tsunoda has explained the confusion between himself and his Carlin team that cost him the lead in the Formula 2 feature race at the Red Bull Ring.

Tsunoda started from pole, in just his second weekend in the series and after much delay, on a very wet track and was leading Virtuosi Racing’s Guanyu Zhou for much of the race.

Despite the race’s wet-weather start, F2’s mandatory pitstop rule meant every driver had to stop for a second set of tyres.

While many opted to stop around the halfway mark of the 36-lap race, Tsunoda waited until lap 26 to make his change after several radio and pitwall messages from Carlin, and then suffered from a slow pitstop as the left-front tyre got stuck.

He returned to track in third and tracked down Zhou – despite emerging several seconds back – and then clawed in Prema’s Robert Shwartzman as the track dried, but fell short of beating his fellow rookie to victory by 1.512 seconds.

“I couldn’t hear any radio,” Tsunoda explained. “I think we had a radio issue. Also, I didn’t see the pitwall [through the spray]. Because I just thought the engineer didn’t talk to me at all to let me focus on the race.

“When it started to get really hard to manage the tyres, and I see the wall, the mechanics and engineers seem to [be summoning me to] go to the pit box. So, I went to the pit box and maybe it was not good for the tyre change, but we had better tyres than others, so I just trusted in my speed [thereon] and I just drove as fast as possible.”

Tsunoda passed Zhou without too much difficulty, with the Renault junior losing out on a set-up that was better optimised for the earlier wetter conditions.

“I knew when I’m catching Robert that at the time I just need to push, so I didn’t think about tyre management.

“I think that paid off at the end of the race. I started to struggle with the rear tyre, and my pace just stopped. It was just a similar pace to Robert, and there was not enough pace to pass Robert.

Despite not taking victory as anticipated, 20-year-old Red Bull junior Tsunoda was pleased to secure a podium finish.

“I think I expected to win this race for the championship because I lost everything from last week, but I think for me it’s a good start. We take a P1 in free practice and qualifying so I think it’s good for the team and good for me and I build up the pace.

Race winner Shwartzman also suffered from rear tyre degradation late on, and has his race “saved” by a red flag between the formation laps and the race start after a technical issue.