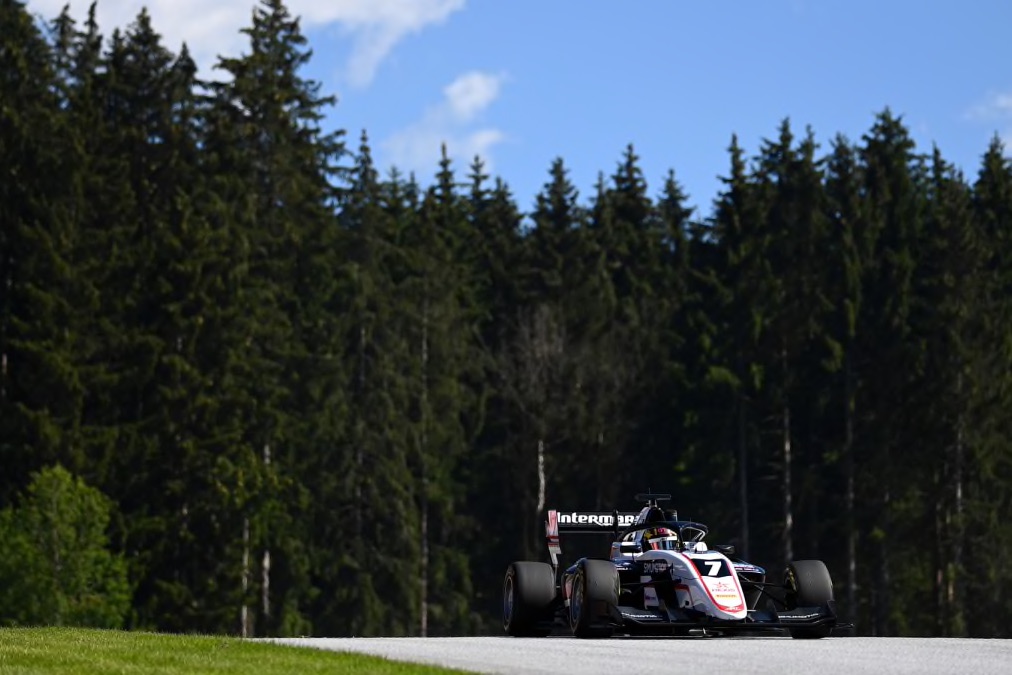 Lawson and Hughes spent the entire race squabbling for position after Lawson took the lead with a stunning move to pass Hughes and Pourchaire simultaneously.

They swapped places multiple times but it was Lawson who held it on lap 21 of 24, when Hughes tried to make a move around the outside of Turn 4.

Up on the inside kerb, Lawson slid towards his rival, the two made contact and Hughes was sent spinning through the gravel with a damaged suspension.

Hughes rejoined the track sideways, but the rest of the field were able to avoid his HWA Racelab-run car. Lawson made it one more corner before running off into the gravel and out of the race.

The incident brought out the safety car and racing did not resume.

Pourchaire was handed the victory which makes the 16-year-old the youngest ever winner in FIA F3 or its predecessor GP3, beating record of Mitch Evans from 2011 by just four days.

He finished ahead of Logan Sargeant, who had spent most of the race trying to find a way past the ART driver and onto the podium.

Action was paused midway through the race when Sophia Floersch and Alexander Smolyar made contact in a battle outside the top 20. Smolyar tapped the rear of Floersch’s car, sending her into the polystyrene advertising boards and out of the race, which brought out the safety car.

On the restart, Frederic Vesti was able to go side by side with Oscar Piastri in what was the battle for eighth. Piastri managed to hold onto the position as Max Fewtrell forced Vesti to turn from attack to defence.

He passed Olli Caldwell in the closing stages of the race to take fifth, while Fewtrell passed Vesti to move up to P7.