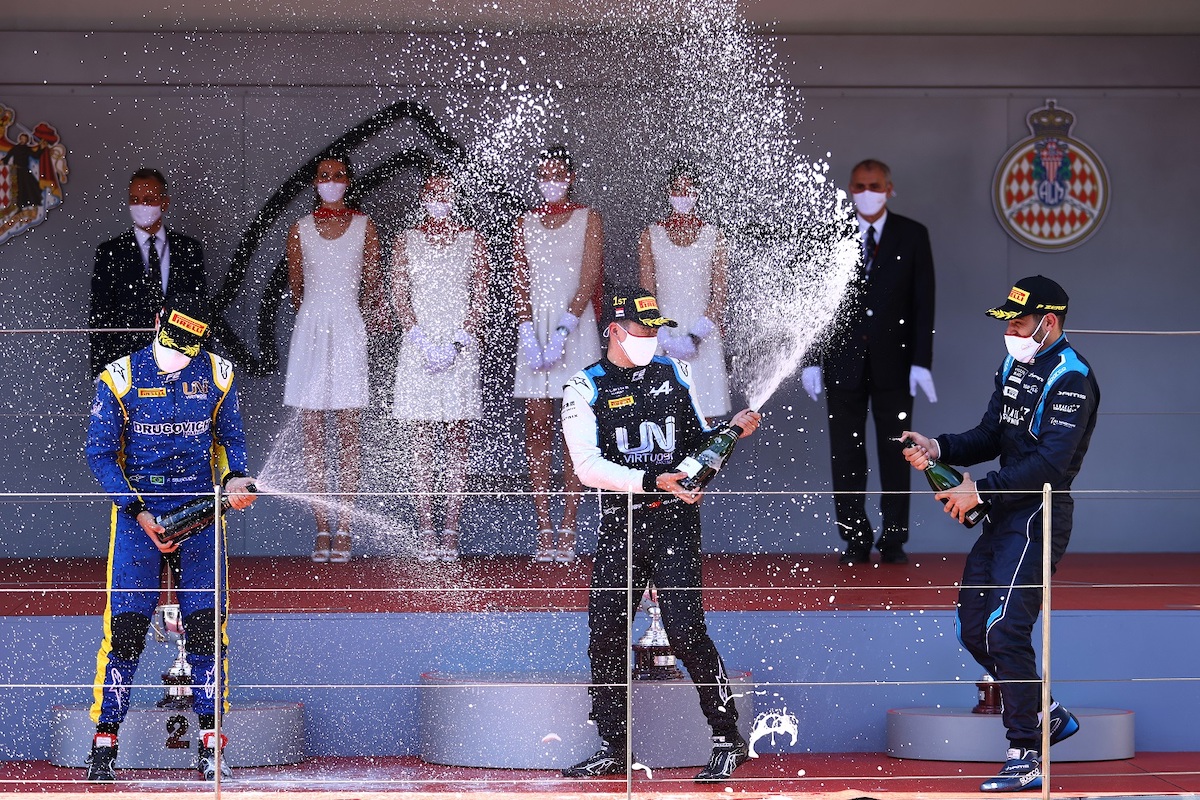 A late safety car period caused by Campos Racing’s Gianluca Petecof crashing brought team-mate Drugovich back onto Zhou’s tail, but the poleman managed a strong restart to leave the rest of the field behind.

Zhou initially came under pressure from ART Grand Prix’s Christian Lundgaard in the opening laps. His fellow Alpine Academy member got the best start off the grid, diving past Drugovich on the approach to the first corner.

Lundgaard was never close enough to challenge Zhou for the lead though around the tight Monaco street circuit, and the two began to pull away from Drugovich in third prior to smoke starting to emerge from the rear of Lundgaard’s car.

The Dane continued for a handful of laps even with the apparent engine issue, with other drivers reporting fluid being expelled by Lundgaard’s car. He eventually pulled into an escape road where he retired from the race.

Drugovich had fallen even further back from the leaders during Lundgaard’s incident, and was making little progress in closing the gap when Petecof’s crash and the safety car brought him back onto Zhou’s tail with five laps to go.

The track went green again with three laps left to run, but Drugovich was unable to make a move on the restart and Zhou pulled away for a second straight win.

DAMS’ Roy Nissany was promoted to third by Lundgaard’s retirement, but was under pressure from Campos’s Ralph Boschung after the restart. Buschung challenged Nissany, but wouldn’t risk an overtake, and claimed his personal-best result in fourth.

Juri Vips became the leader of a small train of cars in the closing laps. The Hitech GP driver, who claimed fastest lap but was also under investigation for a safety car issue, had Carlin’s Dan Ticktum fighting to find a way past and had to defend hard.

Behind them, ART’s feature race poleman Theo Pourchaire and Prema’s Oscar Piastri had climbed up to seventh and eighth ahead of Hitech’s Liam Lawson.

Carlin’s Jehan Daruvala led the battle for 10th for much of the race, holding off DAMS’ Marcus Armstrong until the final corner of the race. Armstrong forced his way through, the pair making slight contact, to earn 10th and pole for the reversed grid second sprint race.

HWA Racelab driver Alessio Deledda ended up being lapped after controversially being allowed to start after going too slow in qualifying, while Trident’s Marino Sato stopped with two laps to go and Prema’s Robert Shwartzman didn’t make it past lap one after crashing.