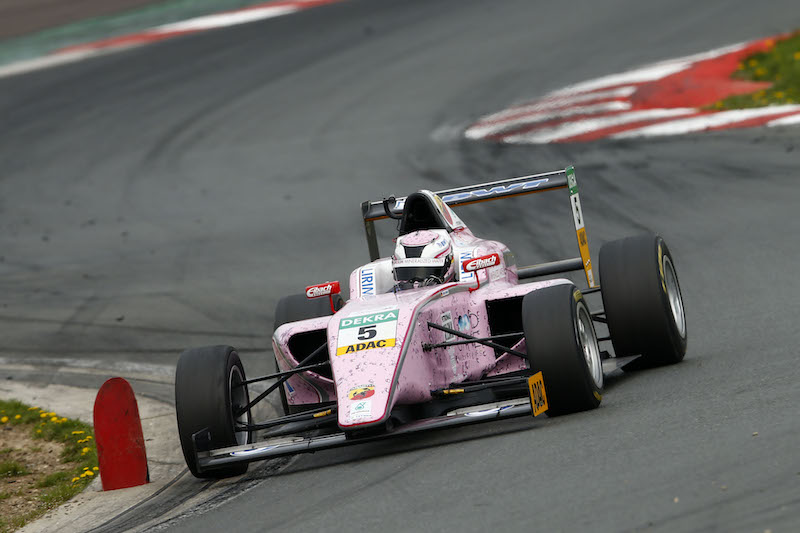 Lirim Zendeli claimed his maiden ADAC Formula 4 win in the final race of the opening round at Oschersleben from fourth?on the reverse-grid after both front-row starters beached themselves in the gravel at Turn 1.

Kami Laliberte started from pole position and moved to the inside to cover off Marcus Armstrong into the first corner, but both drivers failed to make the corner and drove into the gravel trap, where they got stuck.

That brought out the safety car, with Zendeli having jumped?Mucke Motorsport team-mate Oliver Soderstrom to get the lead.

The safety car returned in the middle of the race to allow gravel to be swept from Turn 1 – first with a single broom and then a truck – after Louis Gachot bounced?the gravel trap, although Van Amersfoort team-mate Frederik Vesti did do similar soon after the restart to spray the track once again.

After the second restart with 13 minutes remaining, Zendeli pulled away from Soderstrom to win by 2.671 seconds.

Andreas Estner scored his first point in 10th after a pass on Charles Weerts after the first restart, with the Belgian Motopark driver then diving into the Turn 1 run-off area seemingly in avoidance of Sophia Floersch, who was locked up down the inside of another car behind.

Starting 21st after his race-one penalty for abusing track limits, qualifying pace-setter Felipe Drugovich made it home in 12th place, surviving a late clash of wheels with Michael Waldherr at Turn 1 that sent the Neuhauser driver up onto two wheels and out of the race.