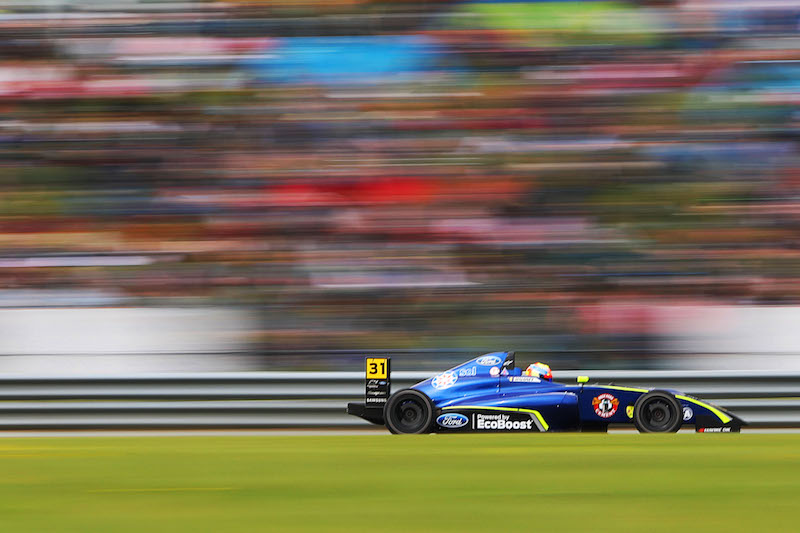 Zane Maloney held off late attacks from Louis Foster to take his second win of the British Formula 4 weekend at Thruxton.

The Carlin driver pulled off a move around the outside of the chicane to snatch the lead on the opening lap, and was able to build a small gap to Tommy and Louis Foster as they battled for second.

Unlike race two, though, Maloney was less than a second ahead of P2 when Louis Foster passed Tommy Foster at the chicane. The Double R Racing driver quickly shook off Tommy Foster and set about closing the gap to Maloney.

With a series of fastest laps, Foster closed in to just 0.211s, but ran out of time before he was close enough to make a move on Maloney.

Tommy Foster ended the race with Josh Skelton on his tail, but held on to finish fourth. Skelton took fifth, just 1.171s ahead of team-mate Carter Williams.

Bart Horsten took seventh ahead of Joe Turney, who was handed a five second penalty after an early incident.

After a difficult start to the weekend, Luke Browning had been running inside the top six early on before a spin dropped him outside the top 10. It was then a slow climb up through the order for the Richardson Racing driver, but he eventually came through to finish ninth.

Alex Connor rounded out the top 10 despite being hit by Mario Martinez on the final lap.