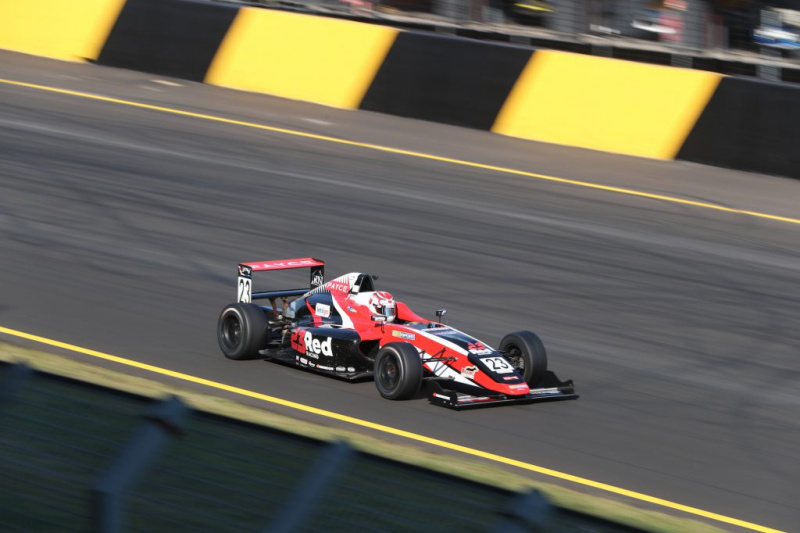 Luis Leeds extended his championship lead in Australian Formula 4 after winning two of the three races at Sydney Motorsport Park.

Leeds was on pole for both of the races he won, and on both occasions he was able to hold off Lochie Hughes at the race start before creating a gap to the rest of the field.

Race two on Sunday proved to be more difficult for Leeds however. He started in fifth and twice during the race – on lap two and six of 11 – he went wide and fell to the back of the grid.

Leeds didn’t give up and spent the second half of race two making his way back up the order, setting the fastest lap in that race and more importantly pipped Jackson Walls to the final podium spot.

The second race was won by Antonio Astuti who had started the race in third, although he was involved in two different incidents. On the opening lap he made contact with Hughes which led Hughes to retire.

After taking the lead of the race from Walls on lap four, he had to hold off Ryan Suhle – who had failed to start race one. The pair made contact on lap nine when Suhle attempted to overtake Astuti, although neither of them sustained damage.

Suhle also finished third in race three and picked up the fastest lap of that race. However Astuti’s fourth place in race three – added to a podium finish in race one and his win – means he leaves Sydney second in the standings, behind Leeds but ahead of Hughes and Suhle.

Over in Russia the second round of SMP Racing’s F4 championship took place at the NRING Circuit, with Artem Lobanenko and Alexey Nesov both taking a win in race one and race two respectively.

Lobanenko had to hold off Pavel Bulantsev – who led the championship going into this weekend – for the majority of the race after Bulantsev was able to get by Nesov at the start.

Bulantsev tried an overtake on lap 14 of 18 but stayed behind to take second in race one, over eight seconds ahead of Nesov in third.

Nesov started outside of the top five in race two, but was able to make his way up to fourth before the safety car came out on lap four of 21 so that Bulantsev’s car could be retrieved.

It took him just two laps after the race restarted on lap 11 to move into the lead with a 2.676s gap. The gap to Alexander Vilaev and Nikita Alexandrov started to reduce during the final laps, but he wasn’t troubled before taking the chequered flag for race two.

Alexandrov took second place ahead of Lobanenko after Vilaev went wide on the penultimate lap and fell down to fifth place.