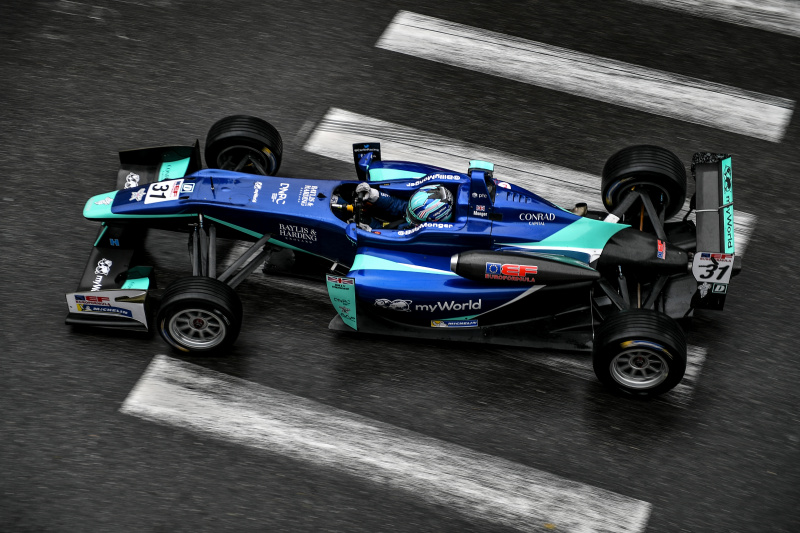 Rain fell on the formation lap, which prompted Monger, along with his Carlin team-mate?Nicolai Kjaergaard and Aldo Festante, to pit at the end of the formation lap for wet-tyres while the rest of the field stuck with their slick tyres.

An early safety car, triggered by Rui Andrade by binning it, allowed the trio to immediately catch up onto the back of the field, while polesitter Hanses led his team-mates Yuki Tsunoda and Lawson at the front of the field. Lawson squeezed past Tsunoda for second with the latter dropping back.

Monger scythed his way through the field, and midway through the race, the rain worsened, his pace advantage grew to over two seconds per lap, and he passed Tsunoda for third place, closing on the top two.

Lawson was pressuring Hanses before he attempted to pass him at the same chicane that he slipped past Tsunoda. However, Lawson was unsuccessful and collided with a team-mate for the second successive round. Both were immediately eliminated from the race.

This promoted Monger into the lead and brought out a safety car. On the restart, Monger was able to fend off his team-mate Kjaergaard to take his first EF Open win, and lead a Carlin one-two.

Tsunoda switched to wet tyres under the safety car, and was able to move his way up onto the podium, ahead of Lukas Dunner (Teo Martin), one of the first drivers to change to wet tyres during the race.

Christian Hahn completed the top five ahead of Marino Sato, who struggled all-race to match the pace of his three Motopark team-mates.

Teppei Natori was seventh ahead of American racer Cameron Das. Guilherme Samaia and Festante rounded out the top 10.

Jack Doohan was another driver to meet the barriers, capping off a miserable weekend for the Australian. BRDC British F3 champion Linus Lundqvist triggered a three-car pile-up late on when he sent his car into the barriers while attempting to overtake Cameron Das for third place. It ended Festante’s hopes of a podium too.