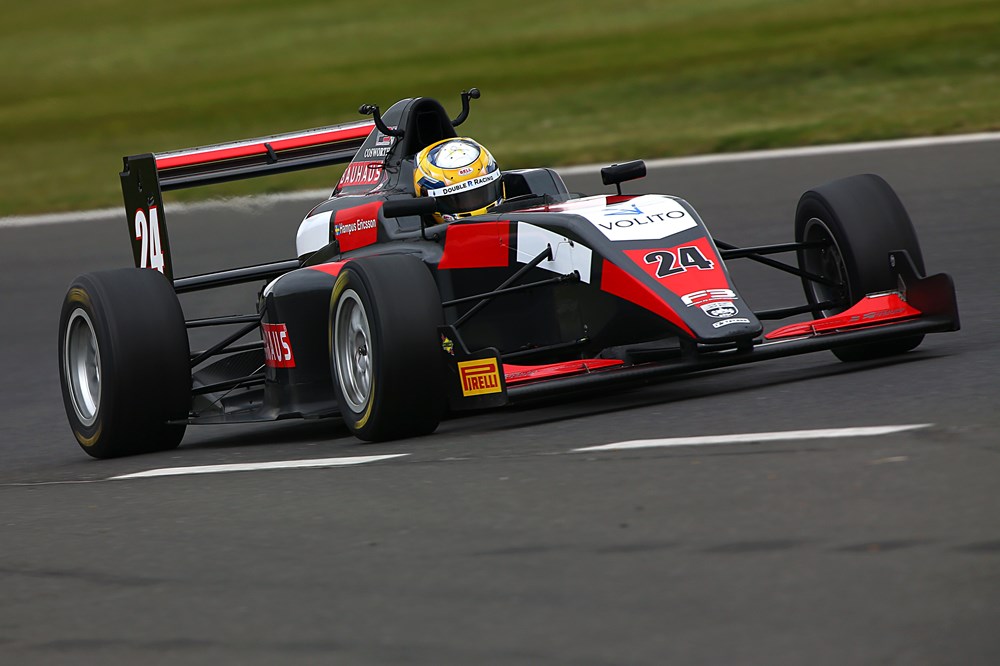 Hampus Ericsson claimed his maiden win in BRDC British Formula 3 in the final race of three at Snetterton.

Double R Racing’s Swedish driver took control of the lead of the race by passing pole-sitter Johnathan Hoggard on the outside entering the first turn on the opening lap, having started alongside the Fortec driver on the front row of the grid.

Nearly half of the race was run under the safety car after the cars of Hoggard, Ericsson’s team-mate Neil Verhagen and Douglas Motorsport’s Kiern Jewiss needed to be retrieved. Verhagen and Hoggard made contact which put Verhagen on to the grass and unable to stop before collecting the other two cars at the corner.

During most of the second half of the race, after the action got underway again, the top four of Ericsson, Clement Novalak, Kaylen Frederick and Ayrton Simmons were separated by only two seconds.

However no one was able to make a move work, leading Ericsson to claim his maiden victory in British ahead of the Carlin duo behind.

Nazim Azman was able to rise up to sixth place by the end of the race after starting 12th, with Douglas Motorsport duo Ulysse de Pauw and Benjamin Pedersen ending up in seventh and eighth behind.

Josh Mason (Lanan Racing) and Kris Wright (Fortec Motorsports) completed the top 10 after race two winner Lucas Petersson and Pavan Ravishankar both fell out of the top 10 on the final lap to finish 11th and 12th respectively.