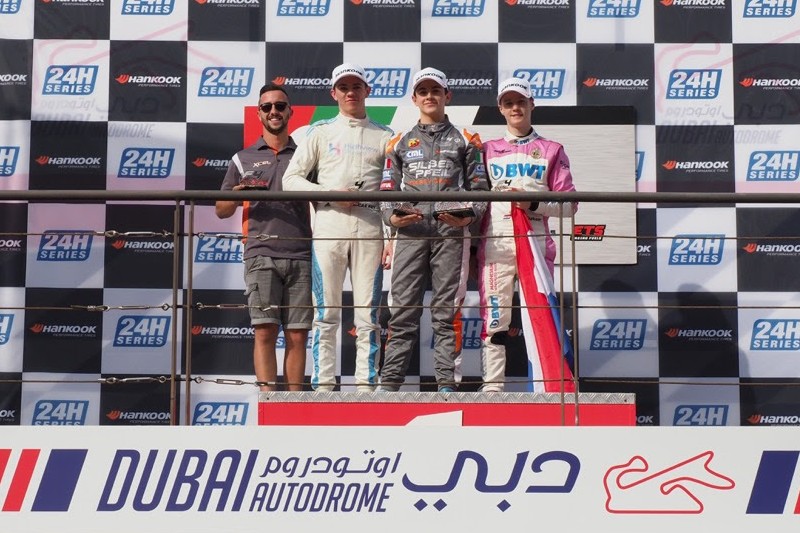 Nannini topped qualifying for Xcel Motorsport, runner-up in the teams standings in the previous two seasons under the name Energy Dubai, and converted that into a debut victory. In the race he beat championship returnee Lucas Alecco Roy, who had qualified fourth for Dragon Racing. Mucke Motorsport’s Paraguayan karting graduate Joshua Duerksen recovered from a poor start of the race to claim third.

The grid was reversed for race two, with poleman Rui Andrade almost immediately being passed by team-mate Roy and Nannini. The front two pulled away, with Roy starting his third full season of F4 with his first victory. Andrade finished a very distant third, but still a clear margin ahead of Mucke’s Durksen and Nico Gohler. Midway through the race, Shihab Al Habsi and?Nicola Marinangeli collided.

Nannini took pole for race three on second fastest times, but this time he failed to win as Al Habsi applied pressure from the front row, eventually overtaking Nannini and winning by 3.102 seconds. The 15-year-old Omani is the first Middle Eastern to win F4 UAE, and the first to win in any single-seater race since 2017. He is also only the second Omani to win in single-seaters, 13 years on from Ahmad Al Harthy’s two wins in Middle Eastern FF1600.

Gohler started the final race from the front, but it was Durksen who controlled proceedings, and took the final win of the weekend. According to Formula Scout’s research, Durksen is the first ever Paraguayan to win a single-seater race. Andrade rose from fifth on the grid to finish second, with Gohler beating Al Habsi and Nannini to the final podium spot.

Nannini leaves Dubai with a four point lead over Durksen, with Roy a further six behind in third. All 10 drivers present scored points, with Spanish F4 regular Rafael Villanueve propping up the standings with 10 points.