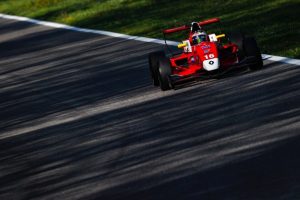 The Josef Kaufmann Racing driver made a clean get away from pole while Renault F1 juniors Christian Lungaard and Max Fewtrell made contact in their battle for second on the run to the first corner.

Lungaard managed to hold position and a safety car at the end of lap two ? brought out after a collision between Axel Matus, Alexander Vartanyan, and Vladmir Tziortzis – allowed the MP Motorsport driver to close in on the race lead.

Ye enjoyed a perfect restart and set about building a gap to the rest of the field. He finished 1.652s ahead of Lungaard to take his first Eurocup victory, promoting him to the top of the championship standings.

Paul Ricard race winner and former championship leader Fewtrell dropped down the order after his contact with Lungaard and was forced to pit at the end of the opening lap. He returned to track but couldn?t fight his way back through the field, eventually finishing 22nd, albeit with fastest lap.

JD Motorsport driver Lorenzo Colombo made a strong start to move up to third after starting sixth on the grid. He spent the second half of the race following close behind Lungaard, but was never quite close enough to attempt a move. The rookie settled for third, taking his first podium in the championship and the team’s first since the Nurburgring round in 2015.

Fourth place initially belonged to Richard Verschoor, but came under pressure from Alexander Smolyar after the safety car restart and was demoted to fifth. He then lost a further three positions when he locked up at the Retefillo chicane and had to take the escape road.

He set about carving his way back up through the order, passing Charles Milesi and Victor Martins. Renault F1 junior Martins fought back once being overtaken, and reclaimed the position by forcing Verschoor wide.

Verschoor fell away from Milesi and Martins in the closing stages of the race and was forced to the pits two laps before the chequered flag.

Milesi and Martins spent the rest of the race battling. Martins took the chequered flag in sixth, behind Alex Peroni, with Milesi less than a second behind.

Logan Sargeant, who won the second race at Paul Ricard, finished eighth with Max Defourny and Thomas Maxwell rounding out the points.