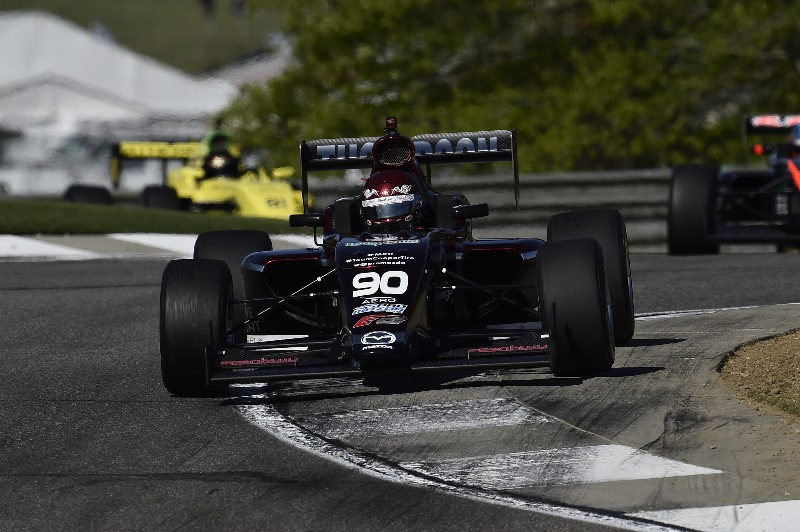 Parker Thompson took a dominant first Pro Mazda victory at Barber Motorsports Park in what was only his and his team’s third race in the championship.

The Canadian broke the track record in qualifying with the new Tatuus PM-18 car, and demonstrated the same level of pace in the race, breaking the lap record multiple times on the way to a 5.2269-second victory over Harrison Scott.

RP Motorsport driver Scott failed to challenge Exclusive Autosport’s Thompson at the start from his front row slot, and despite an early caution period Thompson remained untouchable for the rest of the race.

Scott in turn had a sizeable gap over third placed man David Malukas, who came under pressure from Andres Gutierrez for the final podium spot.

The Mexican couldn’t find a way past, and they ended the race separated by just over a third of a second.

Championship leader and double St. Petersburg winner Rinus VeeKay had a quiet race, rising from seventh to fifth thanks to early problems for Juncos Racing team-mates Carlos Cunha and Robert Megennis, who started fourth and fifth.

VeeKay now has a three point lead over Thompson, with Malukas 12 behind in third.

Cunha went off track at turn 5 on the first lap, dropping him down the order, while Megennis made his mistake at turn 17, and required a pit stop.

This promoted Rafael Martins to sixth, with a race-long battle for the positions behind him.

Reigning USF2000 champion Oliver Askew triumphed in that battle, with Kory Enders, Sting Ray Robb and Cunha completing the top 10. Megennis finished 14th, only ahead of the lapped Charles Finelli.