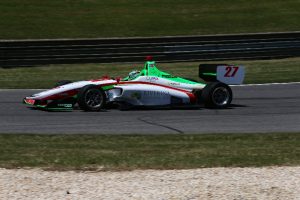 Patricio O’Ward made it two wins out of three after catching out Colton Herta on the opening lap of the first Indy Lights race at Barber Motorsports Park.

Herta took his seventh Indy Lights pole in qualifying, and looked to be safe at the start after Andretti team-mate O’Ward had his mirrors full of Santiago Urrutia.

The long run to Turn 5 meant O’Ward could get a slipstream though, and when Herta left the door open he slipped into the lead.

Moments later the race was neutralised due to a multi-car crash at Turn 3, and Herta seemed to be asleep on the restart a few laps later as O’Ward quickly established the lead that would be crucial to victory.

Herta chiselled down the gap as O’Ward, keen not to repeat the mistake that cost him victory at St. Petersburg, started to struggle with his tyres.

A lock up by O’Ward brought Herta right onto his tail, and the Mexican had to spend the final third of the race with his Andretti stablemate in his mirrors.

Ageing tyres was an issue for both drivers though, and Herta’s pressure relinquished when he too started to lock up on occasion.

“It [the car] was definitely a handful,” said the winner.

“I told the guys on the radio from the second lap: it’s not going to be an easy one. I went a little aggressive on the set-up, because I was having a lot of understeer problems in qualifying.

“That was one of the races where I had to keep myself together for the whole time.”

Urrutia finished a lonely third, and as a result lost the championship lead to O’Ward by a single point.

Reigning Pro Mazda champion Victor Franzoni joined the top three cars in being clear of the lap one crash, but the resultant caution period meant that advantage meant little and he spent the whole race with Ryan Norman sat behind him.

On several occasions it got close, but there was no change of position, and Franzoni could take a third successive fourth place finish.

He took too much kerb through the first turn, and then got loose through the long Turn 2/3 complex. Coming off the brakes as he spun meant he rolled backwards into the path of Aaron Telitz and debutant Alfonso Celis, who had gone to the outside to avoid the spinning car.

Telitz was collected, putting him out on the spot, while Celis and Norman, who ended up taking the inside line, were both delayed. Celis’s Juncos Racing team were convinced his car was also damaged by the crash, and he finished a distant seventh.