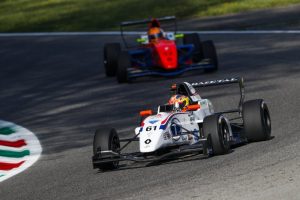 The Italian driver was the fastest in Group A, which was the second of the two groups to go out in the session. He edged Renault F1 junior Max Fewtrell by 0.065 seconds, after the two spent much of the 15-minute session trading fastest laps along with Fewtrell?s R-ace GP team-mate Logan Sargeant and Arden?s Oscar Piastri.

It was the first pole for JD Motorsport since re-joining the series.

Times were generally slower than in qualifying for the first race, although Colombo?s time was actually faster than his Saturday benchmark.

Colombo, who took JD Motorsport’s first podium in almost three years in the first race, will have MP Motorsport’s Renault junior Christian Lundgaard alongside him on the front row.

Lundgaard, who finished on the podium yesterday, went to the top at the final moments of Group B with a 1m49.988s, which was faster than Josef Kaufmann Racing’s race one winner Yifei Ye by 0.159s. MP team-mate Max Defourny was trading fastest laps with Ye and Lundgaard but eventually slipped into a fourth-row position on the grid.