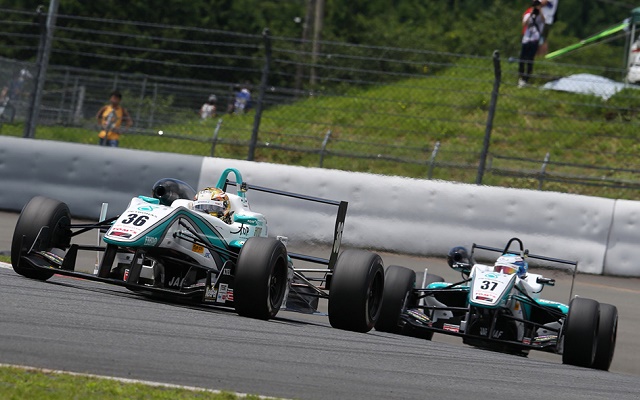 After finishing a disappointing fifth on Saturday, Kenta Yamashita recovered to win the second race of the Fuji round as his main title rivals collided.

Yamashita had lined up only third, behind poleman Mitsunori Takaboshi and teammate Nick Cassidy, and ended up dropping to fourth over the opening lap as Nirei Fukuzumi passed him in the 100 R curve.

Meanwhile, Cassidy had taken the lead, getting a slightly better launch than Takaboshi and sticking to the inside line into turn one.

Takaboshi stayed in touch with the race leader over the opening laps, but himself came under pressure from Fukuzumi.

He was, however, given some breathing room when Yamashita lunged on the inside of Fukuzumi from afar and retook third place.

After briefly dropping off, Takaboshi regained pace and was soon right with Cassidy. On lap 12, his efforts culminated with a crossover move on the Kiwi under braking in turn one.

The duo ran side by side for several turns before Takaboshi, looking to cement the inside line into Dunlop, tried to squeeze Cassidy and ended up making contact.

He was punted into a spin and had to subsequently retire in the pits.

Cassidy’s car sustained no visible damage in the incident, but he was slowed enough to allow Yamashita to catch up and overtake him for the lead on the next lap.

The Kiwi tried to re-pass his teammate over the next few corners, but eventually dropped off, allowing Yamashita to comfortably bring his car home in first.

With the battle for victory settled, a fight for second seemingly beckoned as Cassidy continued to slow and soon had Fukuzumi on his tail.

But the championship leader held firm to complete a TOM’S 1-2, while the HFDP driver settled for his third podium of the year.

In the National class, Ryo Ogawa finished four seconds ahead of nearest rival Ai Miura to take the win and clinched the title with four races to spare.

But in the main points standings, it remains all open, as Cassidy and Yamashita are separated by just three points.

Takaboshi is 14 points adrift of the Kiwi, with 12 available for any given race.