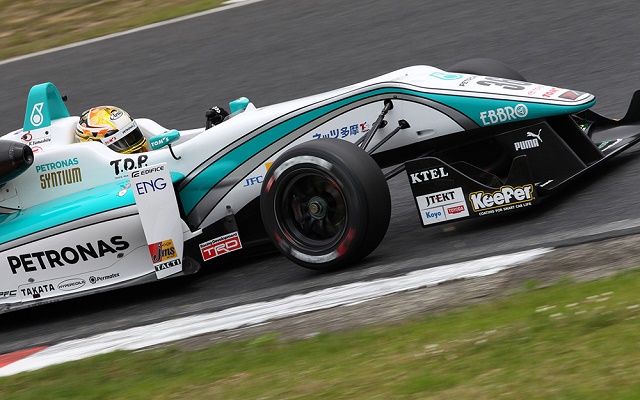 Poleman Kenta Yamashita rebounded from his troubles in the first race of the Japanese F3 Okayama race by easily converting pole into a win in race two.

Yamashita headed what was only TOM’S second 1-2 of the season, despite the team having locked out all but one qualifying session.

After getting a good start, the Japanese racer maintained a consistent lead over teammate Nick Cassidy, the duo finishing 1.5s apart after a 35-minute race.

Mitsunori Takaboshi, TOM’S’ chief rival in the standings, kept third on the opening lap and had to spend much of the race keeping teammate Lucas Ordonez behind.

He succeeded after all, recording his sixth podium in seven races in 2015, with the Spaniard taking fourth right behind.

Nirei Fukuzumi was through to fourth after contact with Toda’s Keishi Ishikawa on lap 11, the latter closing the door on his opponent into the hairpin and ending up sent into a spin. As such, sixth went to Fukuzumi’s teammate Tsubasa Takahashi.