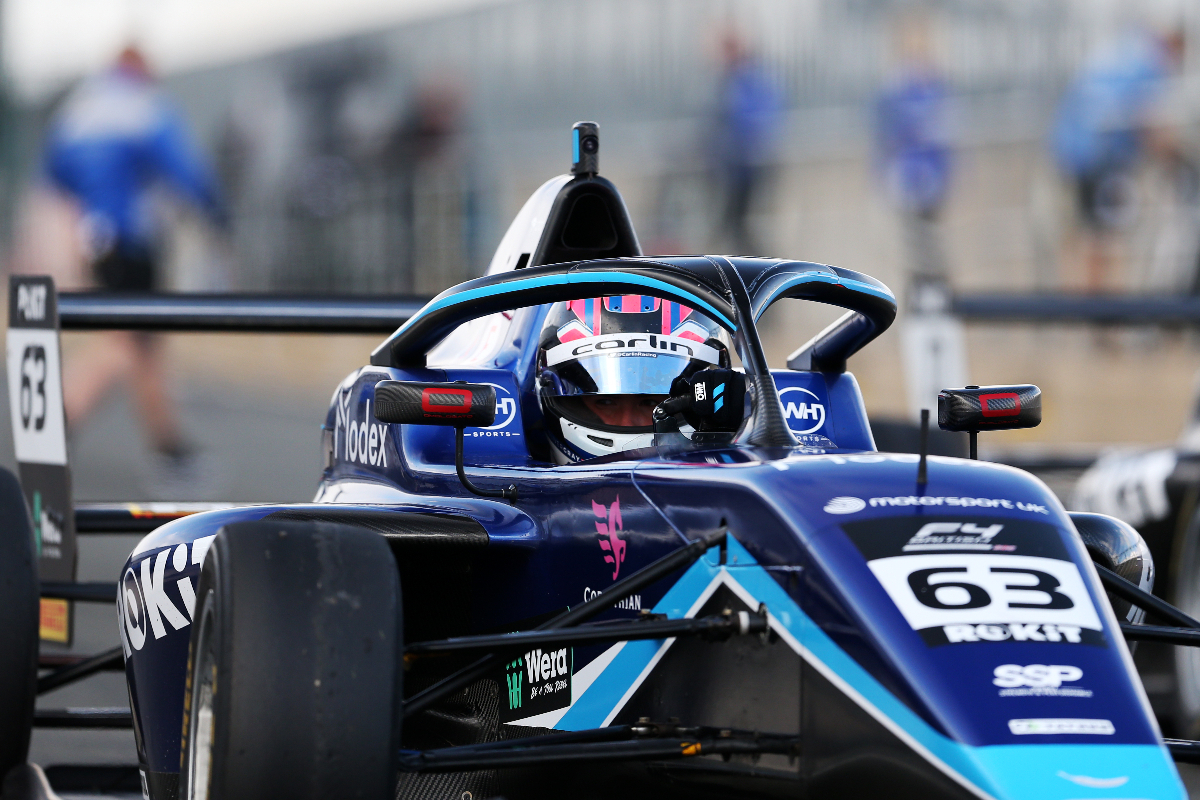 Ollie Gray survived a chaotic opening British Formula 4 race at Silverstone to take his second win of the season.

The Carlin driver took the chequered flag with a damaged front wing and a half-second gap to team-mate Louis Sharp in second place.

Championship leader Alex Dunne recovered from an opening lap incident with Gray to take fourth, the pair having come together while battling for the lead, causing Dunne to spin.

Drama further down the order meant he wouldn’t fall too far back, however. But Dunne then made slight contact with Sharp, damaging Sharp’s front wing and sending Dunne even further backwards.

Sharp had briefly taken the race lead, but Gray soon came back through. He was pulling away from Sharp when the first safety car period of the race began.

Ugo Ugochukwu and Aiden Neate had been battling for postion when the two came together. Neate suffered front-right suspension damage and limped back to the pits while Ugochukwu was left stranded at Luffield.

Racing resumed with 10 minutes remaining. Sharp couldn’t attack Gray on the restart and the Williams junior again created a gap up front.

The gap would once again be reduced to nothing when Joseph Loake ended his race in the gravel, bringing out the safety car for a second time.

There was two minutes on the clock when racing resumed. Gray held Sharp off and finished 0.514s ahead. Sharp took second, comfortably ahead of Mercedes-AMG Formula 1 junior Daniel Guinchard in third.

Dunne had spent the second half of the race climbing up through the order. He was outside the top 10 when the first safety car was brought out, but had managed to climb up to seventh by the time of the second one. He ran side-by-side with Eduardo Coseteng and Noah Lisle on the restart, coming out on top to move into fifth, then passed Georgi Dimitrov in the closing stages of the race and was on Guinchard’s tail when the chequered flag fell.

Dimitrov finished fifth ahead of Lisle and Coseteng.

Jack Sherwood and Oliver Stewart managed to avoid the drama to finish eighth and ninth, just ahead of the battle for 10th. Edward Pearson and Marcos Flack had been battling for the position when they made contact at Maggots and Becketts, sending them both down the order. Michael Shin, who had fallen backwards during the first safety car period, recovered to take P10.