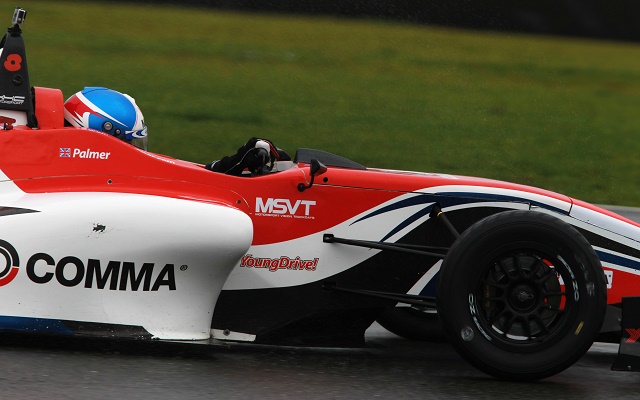 HHC driver Will Palmer became the second champion of the BRDC F4 Winter Series, recovering from a first-lap incident to win the final race of the season at Brands Hatch.

Palmer started from pole and only needed to finish the race to claim the title, but made contact with title contender Rodrigo Fonseca into Paddock Hill Bend, falling down to fourth place as the Mexican retired on the spot.

It was Mectech’s Connor Jupp who took over out front and youngster immediately set out into the distance, pulling away from second-placed Gaetano di Mauro.

With Jupp escaping out front, Palmer first picked off Jordan Albert for third and then put pressure on sole remaining championship rival di Mauro, taking advantage of an error from the Brazilian on lap 11.

Two laps later, Jupp – now almost seven seconds up the road – was caught out in the tricky conditions, bringing out the safety car and missing out on his first win in cars.

The new race leader Palmer then nailed the subsequent restart and stormed to victory. Further back, Albert passed di Mauro on the final straight to clinch second.

Enzo Bortoleto was a close fourth, while Fernando Urrutia and Zubair Hoque completed the runners, as series newcomer Paul Sieljes had retired on the opening lap.