Home Featured Where will Italy’s next F1 driver come from?
Features

Where will Italy’s next F1 driver come from?

Following the news that there will be no Italian drivers on the Formula 1 grid this season, we look at where their hopes are for future Grand Prix contenders…

For a country with such motor racing heritage, it is difficult for some to stomach that Italy will not be represented in the driving talent on the grid this year. The nation hasn’t produced an F1 driver since Tonio Liuzzi in 2005 – so it’s no big surprise to see them left without a driver as veteran Jarno Trulli’s career comes to an end.

As of last year, the nearest Italian driver to F1 was Luca Filippi. He was contesting his sixth year in GP2. Filippi finished fourth in 2007, but struggled the following year when he switched to multiple champions ART. He picked himself back up with a return to Super Nova in 2009 and ended up fifth. 2010 saw him restricted to being an injury replacement at Super Nova mid-season, but was back with the team at the start of 2011. An enforced mid-season switch to Coloni saw him have a spectacular second half to the year and he finished as runner-up.

Despite this, Filippi has been unable to attract any attention from Formula One. Without any financial backing, his long stay in GP2 probably didn’t help his case. He was part of the Honda team when it was in F1, but lost out when they pulled out of the sport. He’s now looking towards Indycar.

So, who else is worth looking out for. Two Italian drivers were in action at the young driver test – Mirko Bortolotti at Williams and Kevin Ceccon at Auto GP. Both were champions of their respective series in 2011 – Bortolotti in F2 and Ceccon in Auto GP. Bortolotti was previously on the books at both Red Bull and Ferrari, but a poor GP3 campaign in 2010 saw him lose the backing of the latter, who had signed him up when Red Bull let him go. He relaunched his career in F2 last year, but again a lack of funding seems like it will stop him from progressing any further.

Few people had ever heard of Ceccon before 2011, but he burst onto the scene as a teenager in the high-powered Auto GP series. He won the title more thanks to consistency and 100% attendance than outright pace, but had still demonstrated his talent. He also made some GP2 appearances for Coloni, and looked a shoe-in for a full-time ride there for 2012.

However, his place at the team has instead been taken by another Italian – Fabio Onidi. That’s presumably down to funding, seeing as Ceccon doesn’t have anything in place elsewhere. Onidi has been a consistent frontrunner for the past four years in Auto GP (and its predecessor Euroseries 3000), but there’s been nothing to suggest he’ll be a future superstar. He was pacey in GP2 testing at the end of last year though – 2012 will prove whether he’s any good or not. 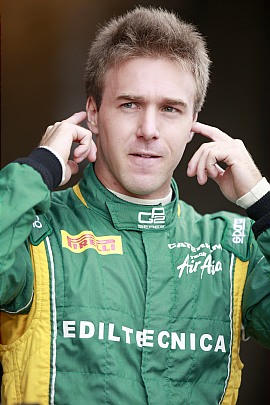 Valsecchi has something many Italian drivers don't - cash. Photo: GP2/LAT

Another Italian to keep an eye on in GP2 this year will be Davide Valsecchi. Valsecchi will be contesting his fifth year in the category (knocking on Filippi territory here!), having only racked up three main series wins in his four seasons so far. A standout performance did come however in the 2009-10 Asia Series, which he dominated. Unfortunately he has failed to turn this into results in the main series – where he has finished eighth overall for the past two years. He impressed HRT in a test in late 2010, and was a reserve at Lotus (now Caterham) last year. Victory for the sister GP2 squad at Monaco had him well in contention, and there was speculation he could replace countryman Trulli in F1. However, his season soon fell apart. Unlike some of his compatriots he doesn’t have the funding issue. Having signed for reigning champions DAMS for 2012, a strong season could lie ahead. After that, F1 could be a possiblity. But will the teams see five years in GP2 as one too many?

Another Italian who started 2011 in good form was Andrea Caldarelli. He was second in the GP3 standings after the opening two rounds, but he was forced to leave the series with long term backers Toyota wanting him to race in Formula Nippon in Japan. The Japanese company has now earmarked him as a junior driver for their new sportscar project.

Another Italian who could have made a big impact last year was Davide Rigon. Rigon twice won the football-themed Superleague Formula series, and this tempted Ferrari to sign him up as a development driver for 2011, alongside an assault on GP2. He was punted out at the first race weekend however, resulting in a broken leg and the rest of the season off. It’s not clear whether he will get the chance to return to racing this year, but Ferrari have at least extended his contract.

Speaking of Ferrari, team prinicipal Stefano Domenicali said he was disappointed by the fact that there will be no Italians on the grid. Despite its patriotism, Ferrari doesn’t have a great record of employing Italians. Domenicali has therefore come under fire after his comments, with people essentially telling him ‘to deal with it’. However, as he outlined in his comments on the Ferrari website, the team are working hard in that area. One of the star talents in their recently-formed Driver Academy scheme is Raffaele Marciello. Despite only being 17, Marciello will race in the F3 Euro Series this year it was announced today, with champion outfit Prema – and big things are expected of him.

Another one to watch on the European scene this year will be David Fumanelli. He came on strong towards the end of the European F3 Open (essentially the Spanish championship) where he finished the year as runner-up. He then went testing in GP3, and was instantly on the pace. As such he has signed with Arden for the coming season.

There is Italian talent further down the ladder too. While McLaren’s Nyck de Vries and Red Bull’s Alex Albon stole the spotlight in the World Karting Championship, Italians Flavio Camponeschi andIgnazio D’Agosto were close behind in third and fourth places in the final standings.

To wrap up, the talent is certainly there from Italy. Perhaps leading figures in Italian motorsport could just help them along a bit. Whatever happens, the drought won’t last long.

As a side note, something I noticed is that Italy could probably try to lay claim to a number of other drivers, with at least four members of the 2012 F1 grid being of Italian descent (according to Wikipedia, anyway). There’s Paul Di Resta of course, while Felipe Massa‘s grandfather came from Italy, and Daniel Ricciardo‘s family originates from Sicily. Bruno Senna also has some Italian in him. Force India reserve Jules Bianchi is also of Italian descent, as is Lotus counterpart Jerome D’Ambrosio. Other prospects include Monaco GP2 driver Stefano Coletti and American hope Alexander Rossi.