Home Featured Weekend Roundup: Three out of four for Rowland at Snetterton
Roundups

Weekend Roundup: Three out of four for Rowland at Snetterton

Oliver Rowland entered the Formula Renault UK Finals Series as the overwhelming favourite, and backed that status up by winning three of the competition’s first four races at Snetterton…

Previously known as the Winter Series, the Formula Renault Finals Series sees a bumper grid of UK series regulars, European teams as well as entries from the lower-level BARC championship. After finishing runner-up in the main championship in his rookie season in car racing, Oliver Rowland began the six-race series as the favourite.

The Snetterton weekend had two races on Saturday with another two races on Sunday. In qualifying on Saturday, Josh Hill took pole for both of the day’s races. Racing Steps Foundation-backed driver Rowland took the lead of the first race at the start in wet conditions, going onto win ahead of Red Bull Junior Daniil Kvyat and Puerto Rican Felix Serralles. Dan Wells was fourth, ahead of Thomas Jager, Formula Ford graduate Geoff Uhrhane, Josh Webster and Formula BMW Talent Cup winner Stefan Wackerbauer, who was racing in Red Bull colours for Koiranen Motorsport alongside Kvyat.

Rowland fought his way past Hill early on in Saturday’s second race, and kept Wells and Serralles at bay to win again. Kvyat was fourth, with Webster fifth ahead of Wackerbauer, Jordan King and another RSF-backed driver, Jake Dennis.

Hill took another double pole on Sunday morning, and duly converted that into a maiden Formula Renault victory in the day’s first race. Rowland and King joined him on the podium, with Webster, Kvyat and Wells completing the top six. Uhrhane was seventh, with half-Brit, half-Singaporean Melville McKee in eighth.

Normal service was resumed in the fourth and final race of the weekend when Rowland won, after Hill failed to get away at the start due to clutch problems. Webster finished five seconds behind Rowland in second place, with Wells on the podium again some ten seconds further back. The continental quartet of John Bryant-Meisner, Hans Villemi, Jager and Dennis van de Laar were next up, with Hector Hurst eighth.

In the points, Rowland has a strong 38 point lead over Wells, with Webster, Kvyat, Hill and King behind. The fifth and sixth races take place at Rockingham next weekend. 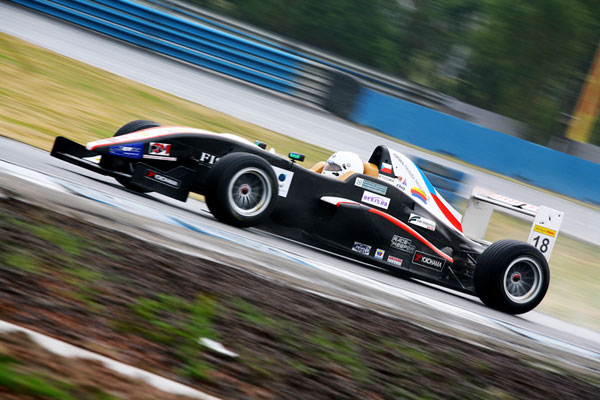 The only other junior series action this weekend took place in China, where the Formula Abarth-based Formula Pilota China series held its penultimate round in support of the World Touring Car Championship round at Tianma in Shanghai. Points leader Matheo Tuscher of the Czech Republic won the first race on the road, but was given a 30 second penalty for being ahead of his grid spot, dropping him to fifth. This handed the win to Italian Lorenzo Camplese, ahead of Japan’s Nobuharu Matsushita and another Italian, Riccardo Agostini.

Tuscher won the second race, successfully keeping Camplese at bay on a wet track. Indonesia’s Dustin Sofyan was third, just ahead of Matsushita. A poor weekend for Tuscher’s nearest rival Luis Sa Silva leaves him 44 points clear ahead of the season finale at Sepang in Malaysia at the end of the month.

PaddockScout Driver of the weekend: Oliver Rowland – There could only be one winner really. A fine performance from the youngster, already giving him a convincing standings lead going to Rockingham.

Weekend Preview: A look ahead to 2012 in the GP2 Final