The Spanish driver wins the most prestigous and final race of the year, in an eventful weekend for some of the top young racers…

In qualifying it was German driver Marco Wittmann who claimed pole position, pipping Roberto Merhi – who had arrived as the pre-event favourite after a dominant season in F3. Merhi wouldn’t be starting the qualification race from the front row though – thanks to a seven-place grid penalty for running into the back of Masters of F3 winner Felix Rosenqvist in the wet first qualifying session. This allowed three drivers who were returning to F3 from a year in GP3 – Antonio Felix da Costa, Valtteri Bottas and Alexander Sims – to fill positions two, three and four on the grid.

Wittmann led the qualififcation race on Saturday from start to finish. British F3 champ Felipe Nasr finished second, benefiting from Sims crashing on his out lap to the grid before the race, and Felix da Costa struggling away off the start with a broken first gear. Merhi also took advantage to jump up to fourth on the opening lap, before taking third from Bottas on the second. Bottas finished fourth, ahead of Carlos Huertas and Daniel Juncadella. 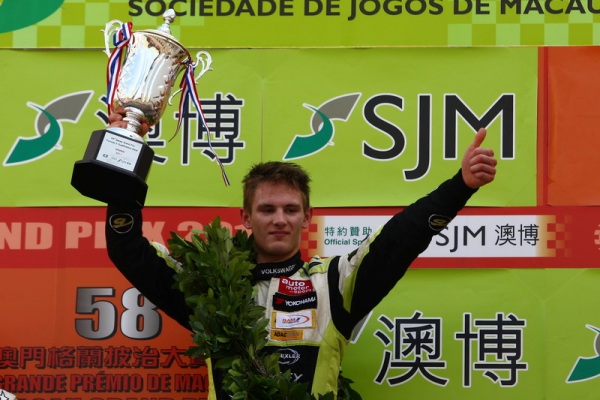 Wittmann was a dominant victor in the qualification race on Saturday - Photo: f3euroseries.com

The start of the big race on Sunday saw Merhi’s victory hopes in tatters, as he was slow away from the line and triggered two accidents. He was first clipped by Laurens Vanthoor, who was in turn collected by teammate Daniel Abt as he spun out of control. Merhi was then hit up the rear by German F3 champion Richie Stanaway. Although he did manage to get away, Merhi’s car was too damaged to continue.

Up front Wittmann was leading from Bottas, Nasr and Juncadella. Huertas spun out of fifth place at Lisboa, blocking the track for the following Kimiya Sato. Misfortune for one Japanese driver was good news for two of his compatriots though – as Hideki Yamauchi and Yuhi Sekiguchi moved up to fifth and sixth places from 11th and 12th on the grid respectively.

The startline crashes saw the safety car come out, and when the race restarted Bottas and Nasr went three-wide with Wittmann, but the German would hold onto his lead. Nasr took second from Bottas at the very end of that lap, while Wittmann began opening up a good lead. Nasr would soon find himself down to fourth though, as Bottas and Juncadella slipstreamed themselves past down into Lisboa. One lap later, Bottas would tag the wall at Lisboa as he defended from Juncadella, taking himself out of the race.

The safety car came out at the end of lap seven when Rosenqvist crashed out, wiping out the 2.7 second lead that Wittmann had built himself. When they got racing agian, Wittmann was shuffled down to fifth as he was the big loser in a crazy fight for the lead down into Lisboa. Juncadella took the lead, with Japanese F3 champion Sekiguchi up into second place, Nasr in third and Hannes van Asseldonk also getting past Wittmann.

Nasr regained second place and Wittmann recovered to third, but Juncadella remained in the lead until a sizeable accident for Kevin Magnussen on the penultimate lap, which also took Carlos Sainz Jr and Hywel Lloyd out of the race. Magnussen said he was happy to have escaped with just a damaged knee, after hitting Will Buller and flying into the air before hitting the catchfencing.

Driver of the weekend: Marco Wittmann – Double F3 Euro Series runner-up took the fight to Merhi earlier in the weekend and came out on top, and was dominant in Saturday’s race. Would have won the main event had a safety car not wiped out his advantage and left him powerless to resist those in his slipstream at the restart.