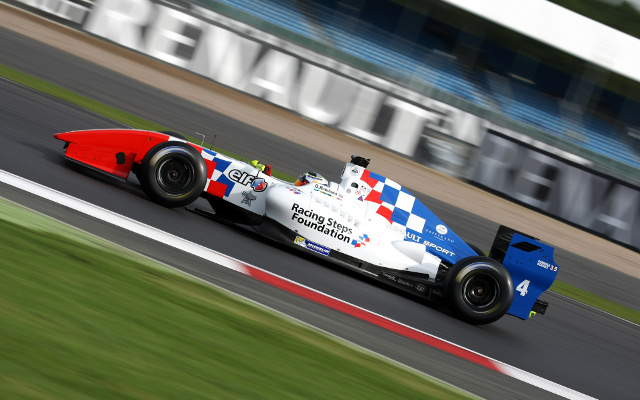 After spending last weekend at Silverstone for the return of World Series by Renault, Peter Allen looks at the developing championship situations in both Formula Renault 3.5 and Eurocup Formula Renault 2.0.

The World Series by Renault returned from its summer break last weekend with its first visit to Britain for several years, and the Silverstone event was an eventful one for both single-seater categories.

In Formula Renault 3.5, it was always going to be a special weekend for Oliver Rowland. Not only did he bring the standings lead to his home event, but holding that position during the summer meant he had the chance to sample a Red Bull Racing Formula 1 car throughout the three-day event.

And when it came down to the serious business of racing, the 23-year-old Briton had a very positive weekend on that front too.

His intense season-long scrap with Matthieu Vaxiviere continued at Silverstone, and the Frenchman’s strong pace put him ahead on the grid for both races – including a dominant pole position on Sunday where he beat Rowland by more than half a second.

But when it came to the races, Rowland ensured that he finished ahead on both occasions, taking second place on Saturday and winning on Sunday.

Those results meant he has stretched his points advantage from 26 to 36 with three rounds remaining.

Perhaps the only fault Rowland could have found with his work was that he still hasn’t managed a perfect weekend with two victories this season. Indeed, he said that achieving that will remain his target going forwards, rather than to focus specifically on getting the points he needs.

His chances of managing it at Silverstone were dashed on Saturday by Tio Ellinas. The Cypriot hadn’t managed to find the podium during the first half of the season after signing a full-on racing and management deal with Strakka Racing, but set the pace from the off at Silverstone. 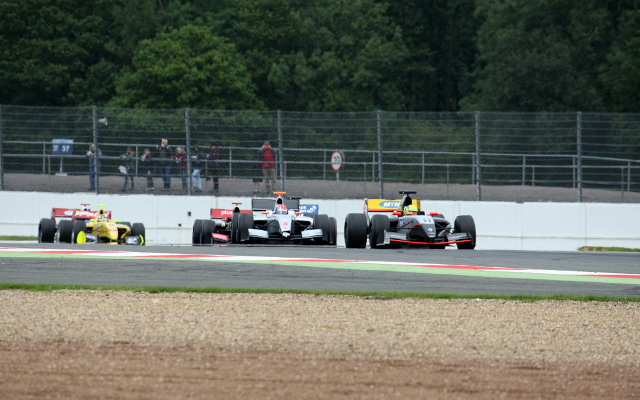 From pole position, he ran away into the distance as the rest of the pack was held up behind Jazeman Jaafar, who lost the tip of his car’s nose when he and Ellinas touched while heading towards the high-speed Maggotts and Becketts curves for the first time.

Rowland had got ahead of Vaxiviere for third just metres before that, but a hard-fought scrap at the end of the opening lap saw Vaxiviere back in front.

Despite Jaafar’s chronic lack of pace – enough to drop him to 10th by the flag – Vaxiviere was unable to make his way past over the next five laps and came back under attack from Rowland, leading to contact between Vaxiviere and Jaafar ahead as the field bunched at the slow Loop left-hander.

Rowland got past Vaxiviere on the following straight and later – having briefly dropped behind Tom Dillmann – pulled off a stunning double-pass to move into second past Jaafar. Vaxiviere survived similar front-end damage to take third.

On Sunday, Vaxiviere looked unbeatable from pole, but lost out during the pitstops. His time in the pitlane was clocked at 29.5 seconds, four seconds slower than Rowland, whose time was nearly a second quicker than anybody else’s.

Once Rowland had emerged back on track ahead, there was another almighty battle between the pair, but Rowland held on up front.

It’s been a common trend in the past couple of FR3.5 seasons for the leading drivers to be able to win both races in a weekend – see the records of Carlos Sainz, Kevin Magnussen and Stoffel Vandoorne.

But Rowland’s fight with Vaxiviere has ultimately been too close for that. At Aragon, Spa and Spielberg, they shared the victories. What Rowland has done is to make sure that when the pair haven’t locked out a double-race weekend – in Hungary and at Silverstone – that he’s been the one to pick up a win, and also to finish ahead in the other race. 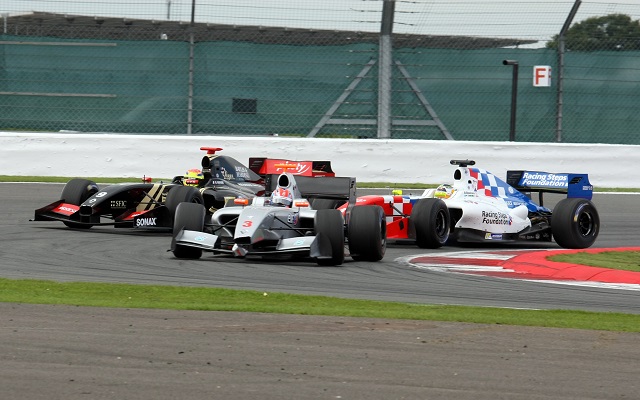 Rowland’s also the one who is generally getting the best results out of his ultimate pace. Nowhere was that more obvious than at Silverstone, and he was well aware of that after his latest win.

“This morning in the second run we found a little bit but I think it?s fair to say that Matthieu this weekend was in a bit of a different league, especially this morning.

“Having said that, my team did an absolutely mega job in the pitstop to get me out in front. But a massive well done to Matthieu as well, I think he?s done a great job all weekend and I think it was a little bit out of his hands.”

Too often overlooked on the ladder to Formula 1, the Eurocup Formula Renault 2.0 round at Silverstone gained some mainstream notoriety for the wrong reasons just a lap into the first of three races.

Ferdinand Habsburg was launched metres into the air in a frightening crash, triggered as a safety car was deployed after Jehan Daruvala rolled early in the lap and landed upside down on a tyre barrier.

Fortunately – and to the full credit of modern safety standards at even this relatively low level – both drivers escaped unharmed, and the focus for the remainder of the weekend turned to a quickly-changing championship situation.

Louis Deletraz had dominated the first part of the season, and I for one had arrived at Silverstone not expecting to see any change on that front. Certainly not given that the Swiss driver had been untouchable at the same circuit in the NEC round at May.

Yet he would be absent from the podium across all three races, and his best finish would be sixth in the final race after a ninth and an eighth on Saturday.

His lead that stood at 34 points at the start of the weekend was down to just one by the end of it. 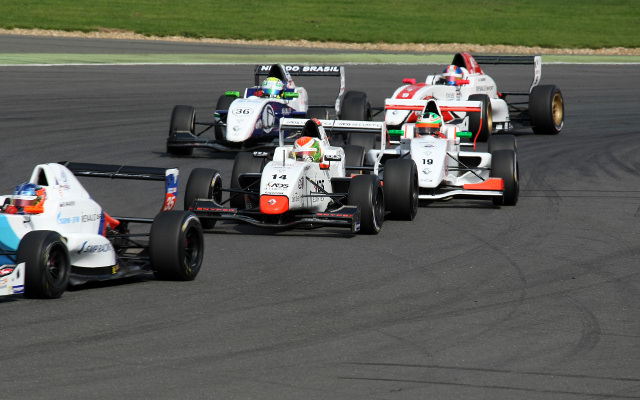 Deletraz (14) spent much of the weekend mired in the midfield (Photo: Paul Davies Photography)

Perhaps that’s not so surprising given that his closest rival coming into the weekend was racing on home soil. Deletraz’s Alps-leading counterpart Jake Hughes?set the pace on Friday and finished third once race one was restarted, behind his Koiranen team-mate?Jack Aitken and AVF’s?Harrison Scott, the trio making for an all-British podium.

Hughes finished in the same place in race two, with Aitken this time second, and he had brought Deletraz’s advantage down to 10 points.

But by Sunday night it would be somebody else heading for this weekend’s races in Germany as the thorn in Deletraz’s side – his compatriot and Josef Kaufmann Racing team-mate Kevin Jorg.

Jorg had been fourth, 42 points adrift, coming into the weekend, but followed fourth in race one with a victory in race two and then second in race three behind Anthoine Hubert – the Frenchman began the weekend ahead of Jorg in third but qualified way down the order on Saturday before picking up his first Eurocup pole and win on Sunday.

For most of the final race, Jorg looked set to snatch the standings lead away from Deletraz until the latter gained a place when a driver ahead spun on the last lap, allowing him to leave with a one-point advantage rather than a one-point deficit.

I was surprised Jorg had managed to all-but eliminate the large gap to Deletraz in the space of one weekend, so I asked him if he was too.

“Yeah, I think I am quite surprised. I?ve seen in the last few meetings, also in NEC, that I can be quicker than him, but that I would catch up so quick… that I didn?t expect.”

In all, Jorg, Hughes, Aitken and Hubert are now all within 25 points of Deletraz with three rounds to go.

And to underline the continued competitiveness of the Eurocup, three of the most highly-rated favourites coming into the season – Dennis Olsen, Ben Barnicoat and Matevos Isaakyan – hold positions seven to nine after tough seasons so far. 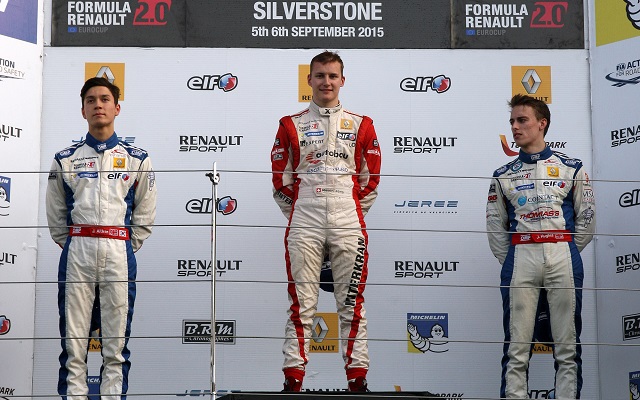 Alexander Rossi follows up his first win of the season at Spa with a second in the Monza feature race after passing Stoffel Vandoorne. It strengthens his grip on P2 in the standings, after Alex Lynn takes Sergey Sirotkin out of an early race lead. Mitch Evans marks his comeback to form by passing Arthur Pic for last-lap sprint race win, having finished third in the feature race from the back of the grid after losing front row start to a tyre pressures foul.

Championship leader Luca Ghiotto claims pole by exactly a second at home but stalls and can’t restart. He then charges from 19th to third in 16 laps to finish behind rival Esteban Ocon, who scores his sixth and seventh straight second-place finishes. He led race one but was beaten to the win – as at Spa – by Emil Bernstorff, who moves ahead on track rather than in the stewards’ room but is eliminated from a third straight Sunday race. Marvin Kirchhofer wins race two after Jimmy Eriksson was slowed by a fuel pump problem. 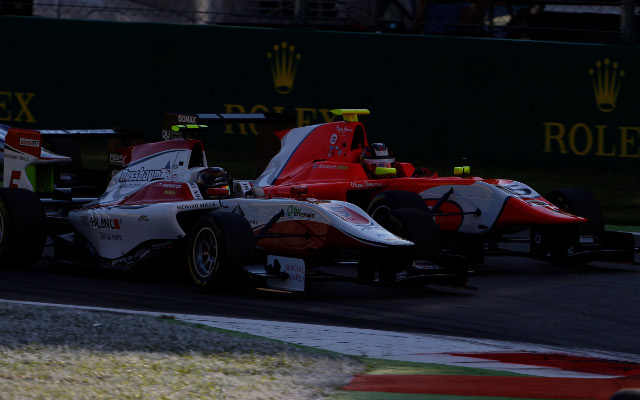 Oliver Rowland twice beats his rival Matthieu Vaxiviere on home soil to extend his points lead. As Tio Ellinas takes a commanding maiden win in race one, Rowland wins heated battle for second ahead of Vaxiviere. Frenchman is dominant Sunday pole-sitter, but has to settle for second behind Briton after slower pitstop. Dean Stoneman climbs above Jazeman Jaafar to third in the standings after nose damage and gearbox problems for the Malaysian.

Kevin Jorg takes a win, a second and a fourth to cut team-mate Louis Deletraz‘s lead to just one point, having been fourth and 42 adrift at the start of the weekend, as Deletraz fails to finish in the top five. British Koiranen pair Jake Hughes and Jack Aitken also move into closer contention with two podiums each, the latter winning race one. Anthoine Hubert recovers from a poor Saturday to win from pole in race three.

Felix Rosenqvist takes the points lead with two wins as Prema Powerteam dominates. In race one he’s third to team-mate Jake Dennis, who with?Lance Stroll completes podium lockouts in races two and three. Erstwhile leader Antonio Giovinazzi is off the pace, with ninth and two eighths. Alex Albon is only driver to break Prema stranglehold, taking second in race one and claiming race two pole, only to be excluded. 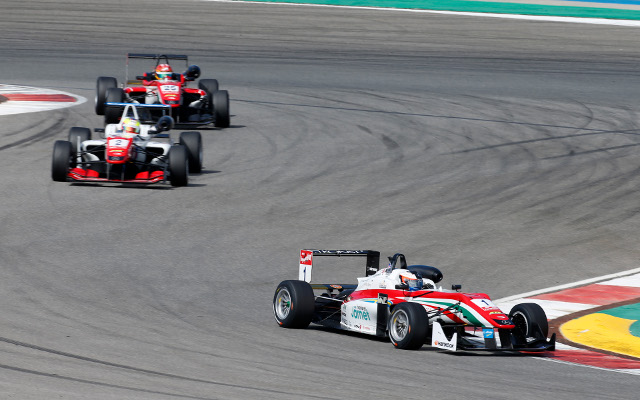 Vitor Baptista wins twice to take the points lead away from Konstantin Tereschenko, who is forced to settle for second place on both occasions. Leonardo Pulcini and Igor Walilko complete the podiums, with the latter getting his maiden rostrum.

Mucke Motorsport wins all three races, with David Beckmann taking the first before Robert Shwartzman scores a pair of long-awaited first car racing victories. At Prema, Guan Yu Zhou beats points leader Ralf Aron to second in race one, but the tables are turned in race three. The Chinese Ferrari protege finished fifth in race two with Aron seventh, but is later relegated to 15th for passing under the safety car.

As he had done at Knockhill, Lando Norris wins the opening race to take the points lead and this time holds onto it. Ricky Collard suffers from a qualifying crash, finishing eighth in the two main races, though does win the reverse-grid second race. After third in race one behind Dan Ticktum, Colton Herta beats team-mate Norris to win race three.

15-year-old Finn Niko Kari wraps up the inaugural SMP F4 title in style by winning all three races at Moscow Raceway, earning himself a prize fund towards a European F3 drive for next season. Nerses Isaakyan takes a hat-trick of second places after taking pole for the two main races, while Nikita Troitskiy was twice third. Karting star Alexander Vartanyan is fourth in race one after qualifying third for his second event. 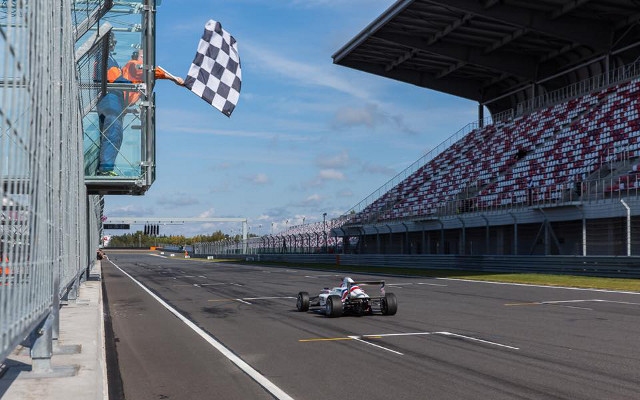