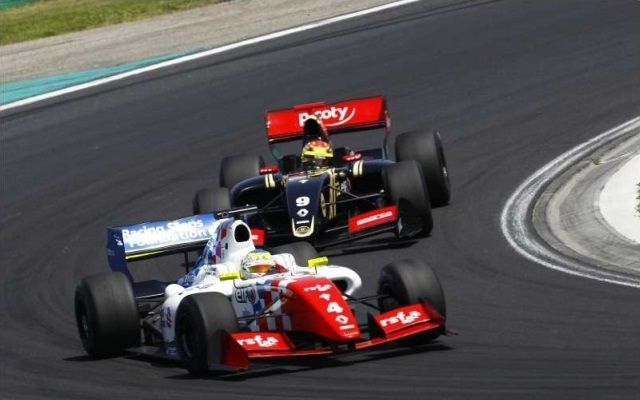 David Gruz sums up the weekend’s action from the third World Series by Renault meeting of the year at the Hungaroring, assessing the state of play in both Formula Renault leagues.

In recent years, the series often found itself racing under rainy circumstances at the Hungaroring, which took its toll on the number of visitors in the country’s ever-popular event.?As a result, the track welcomed the field in the summer for the first time since 2011, and an unsurprising heat welcomed them.

Matthieu Vaxiviere was the early pace-setter of the round but Oliver Rowland took over this important role just in time to claim pole position for Saturday’s race.

Rowland, who took the championship lead two weeks earlier at Spa from Fortec teammate Jazeman Jaafar, was not in control of the race for long as a slow getaway saw him giving up the lead to Egor Orudzhev.

The Briton however maintained his dominant pace and tried everything to take the lead back but the characteristics of the track and excellent defensive driving favoured the Russian, who ended up celebrating his maiden victory in the series and becoming the first rookie to win in 2015.

Things went from bad to worse for Rowland as his relentless charge on Orudzhev even resulted in losing second thanks to Roberto Merhi‘s aggressive last-lap move.?Despite being the only title contender to stand on the podium, Rowland obviously left day one discontented.

A disappointing qualifying on Sunday saw him in fifth only but the Racing Steps Foundation-backed Briton gave it all in the race.?He was absolutely stunning off the line to enter turn one in the lead, which he managed to hold on to until the checkered flag.

Rowland continues to be the class of the field as he left the Hungaroring with the most points collected but it was far from perfect as he could have easily been scoring a double victory.?Still being a close championship, he can’t afford to make errors?like this again but a couple of more consistent rounds in the future could easily make him forget about this mistake. 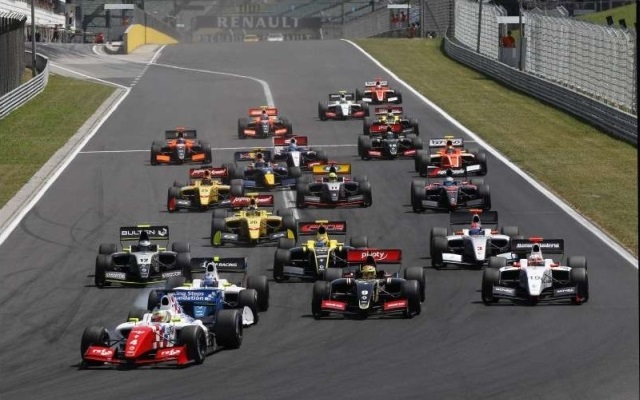 The only other driver to be at the front in both races was Vaxiviere. The Frenchman took second after the start of race one but soon he had to give it back to the recovering Rowland and even missed out on the podium.

The Lotus driver managed to improve for Sunday with a qualifying and better race pace, however, he was unable to resist Rowland’s genius at the start and had to settle for second.

Unlike at Aragon and Spa, where the top two shared the wins, Vaxiviere ended the Hungaroring weekend being beaten by his rival both times on the track, which is obviously something he can’t let happen anymore if he doesn’t want to give Rowland a big lead for the closing stages of the season.

Jaafar in the second Fortec car endured a difficult weekend, scoring only 12 points. He stood no chance to score in the first race after a puncture, and spent the second one minimizing the damage done by a slow getaway.

For the first time this year the newcomer trio of Dean Stoneman, Tom Dillmann and Nyck de Vries could not fight for podium positions, with the best they could manage being fifth, achieved by Dillmann both times while the DAMS duo struggled for pace on the twisty circuit.

Instead, others shone including Orudzhev with his aforementioned victory, Gustav Malja‘s best finish after holding onto third in race two and Merhi’s podium, a success that followed an engine change in his Pons car. 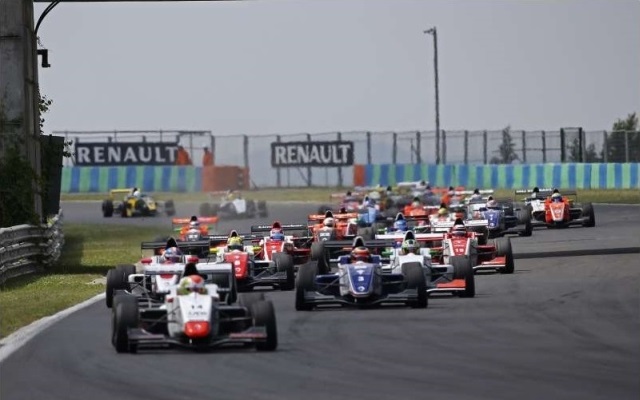 In Eurocup Formula Renault 2.0, the event’s secondary single-seater series, Louis Deletraz returned to winning ways after an unlucky round at Spa-Francorchamps. The championship leader was on his way to score a double victory by topping both of the qualifying sessions and leading every race lap of the weekend.

However, similarly to Rowland, his Saturday victory was already gone?the moment the lights went out but for the opposite reason. Instead of bogging down, Deletraz jumped at the start for which ten seconds was added to his time after the finish.

Although he was not told about this until the final lap, his pace let alone was good enough to still make it to third. There was no stopping him on Sunday and Deletraz collected his fourth pole and third victory of the Eurocup season to increase his lead to 34 points after only three rounds.

His closest pursuers were Jack Aitken and Kevin Jorg, both of them making it into the top four in both races. The experienced Formula Renault 2.0 duo topped group B in the qualifying on Saturday and Sunday respectively, which put them to the front row of those races. They both converted that into seconds places, however, Aitken was lucky enough to inherit first after Deletraz’s penalty.

Koiranen’s other Briton Jake Hughes completed a consistent round with a third and sixth to take second in the standings thanks to a retirement from Anthoine Hubert who has been demoted to third. Jorg is sitting fourth while Ben Barnicoat is fifth in the table, having made it to the podium for the first time since the season opener at Aragon.

After two unlucky rounds, Aitken finally lived up to the expectations of a front-runner, however, he is still only eighth behind Dennis Olsen and Matevos Isaakyan who both completed disappointing weekends, collecting only one point between them and now having less than 50 per cent of Deletraz’s total.

Oliver Rowland extends championship lead to 15 points with two podium finishes. Although he gifts race one victory to Egor Orudzhev after a slow start on Saturday, he makes up for it by winning in race two. Matthieu Vaxiviere takes second behind Rowland, while Roberto Merhi and Gustav Malja both collect their first podium finishes this season.

Louis Deletraz takes two pole positions and ends both races on top but loses the first one after a penalty for jumping the start.? As a result, Jack Aitken celebrates his first Eurocup victory in 2015 ahead of Ben Barnicoat, while Deletraz still makes it to the podium. Kevin Jorg in second completes full JKR dominance on Sunday, while Jake Hughes grabs third to take second in the standings. 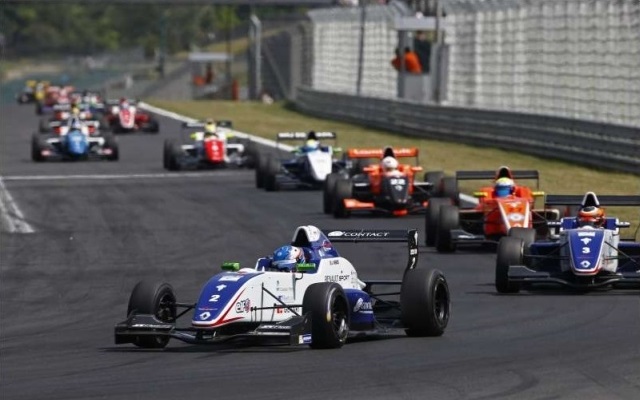 Nelson Piquet claims pole on his Indy Lights debut but it?s Spencer Pigot who closes on championship leader Jack Harvey with two victories. Pigot inherits race one victory after RC Enerson?s horror crash eliminates him and Piquet, and doubles up on Sunday in a similarly chaotic race. Harvey finishes in close second both times while Kyle Kaiser and Ed Jones make it to third one time each. 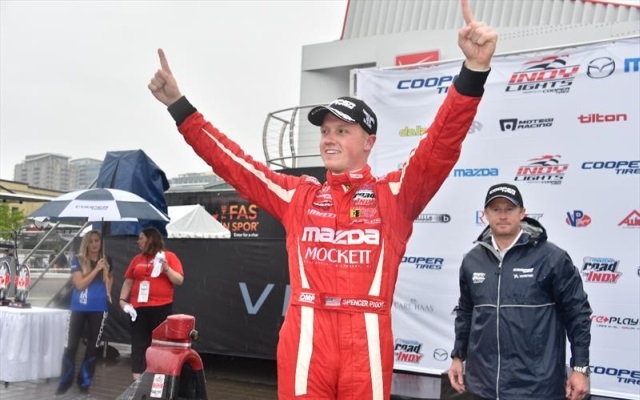 Florian Latorre and Garrett Grist control carnage-filled race one and two respectively to grab first victories in 2015. Patricio O?Ward takes maiden podium in race one ahead of Timothe Buret and returns to the top three in the following race, finishing third behind Weiron Tan. Championship leader Santiago Urrutia completes low-key weekend with fourth and seventh, while his closest chaser Neil Alberico is unable to finish any of the races.

Jake Eidson and Nico Jamin share the spoils on the streets of Toronto. Eidson beats Jamin off the line in race one and holds on to grabs first victory since the season opener weekend. Jamin stays in the lead at the start of race two to win as the duo locks out the top two once again. Australians Anthony Martin and Luke Gabin?both collect a third place.

Trummer makes GP2 return in place of Cecotto at Hilmer