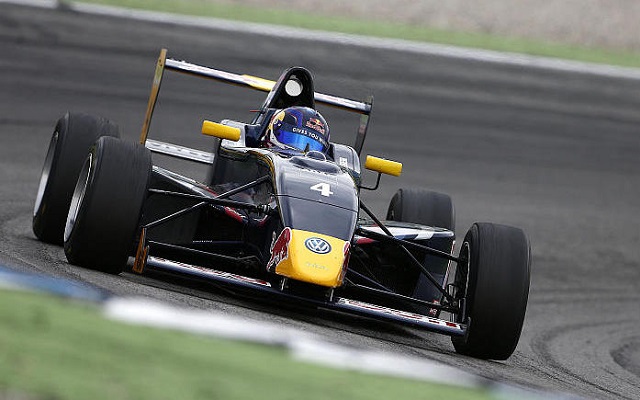 “I?m sad to tell I’m no longer part off the RedBull Junior Team anymore”, announced the Dutch junior on her personal Twitter account. “It was a difficult season and the results were not what both expected. Many thanks to Red Bull and Dr. Marko for the great support they gave me. I will work hard to come back strong.”

Visser, who was unveiled as a Red Bull junior in March of this year, has two years of ADAC Formel Masters with Motopark on her CV. She impressed in her rookie year in 2012, taking eighth overall with two victories despite missing two rounds.

Her second year in the series, driving a car in Red Bull colours, turned out quite mixed, as the Motopark team struggled for pace throughout the season. On her way to another eighth in the standings, Visser took a victory and another podium finish.

With the Dutch youngster announcing her split with RBJT, huge uncertainty exists over the position of Callan O’Keeffe – fellow Red Bull junior in ADAC Formel Masters, who finished 13th in a severely difficult first year.

The ruthlessness that made up the Red Bull Junior Team’s reputation came under a bit of doubt when it was announced that Antonio Felix da Costa would not be dropped by the programme, despite missing out on an F1 promotion.

However, RBJT are now back to familiar ground with the rather harsh firing of Beitske Visser.

While no official reason has been given for the discontinuation of support, it’s not hard to see what inferences led Red Bull to such a decision. In her sophomore year, Visser was expected to be fighting for the ADAC Formel Masters title, but instead ended up firmly in the midfield, perhaps even failing to match the results of her rookie season.

Eighth place in year two of ADAC Formel Masters, a recognized entry-level category, is indeed not very impressive on paper. Yet such a justification comes without proper context.

For starters, despite Lotus/Motopark being a household name in the series, especially following an excellent 2012 campaign, there was little denying that their 2013 efforts weren’t quite up to par. While Marvin Kirchhofer was the absolute pacesetter in his title-winning campaign for Lotus last year, the 2013 car did not have the expected pace – neither in races or in qualifying. The three victories of the year for the Oschersleben squad – two courtesy of fellow sophomore Indy Dontje and one achieved by Visser – were all in reverse-grid races.

It obviously wasn’t all up to the car, but it was also noticeable that Visser herself made a fair bit of improvement over the year. With her teammates acting as the best points for comparison, she trailed behind both Dontje and promising Motopark rookie Mikkel Jensen in the early stages of the year, but was quite obviously the team’s number one in the later stages of the season, constantly fighting for finishes in the top five.

Finally, the German championship was the entry series to be in in 2013, with experienced drivers like Alessio Picariello, Jason Kremer and Nicolas Beer fighting it out with a number mega-talented Formula BMW Talent Cup graduates. Given all the car troubles, there was no shame in finishing eighth.

As usual with Red Bull’s firings, there’s a fair bit of suspicion that they might’ve jumped the gun on that one. 2013 was not great for Visser, but, even obvious marketing potential aside, this is not the kind of talent you toss aside after a few bumps on the road.