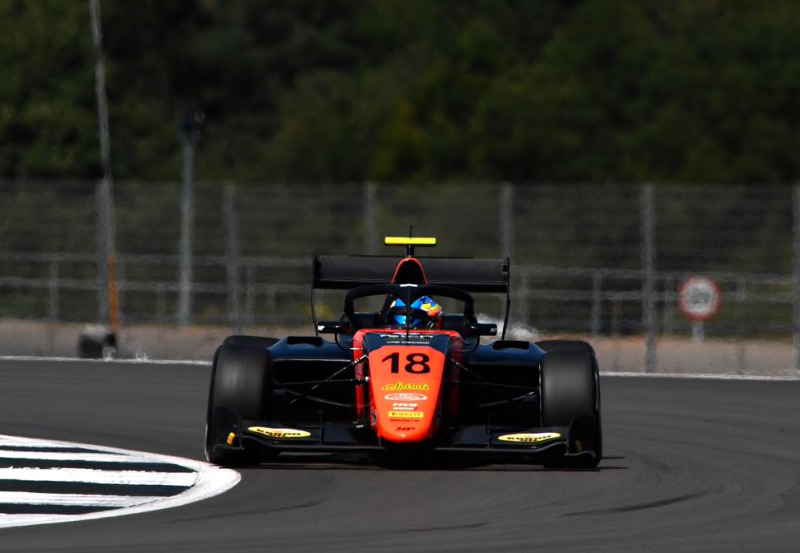 Bent Viscaal beat Lirim Zendeli to the victory in a drag race at the end of the reversed-grid FIA Formula 3 Championship race at Silverstone.

MP Motorsport man Viscaal had spent the entire race on Zendeli’s tail, always within DRS range but never able to make a move on the Trident driver.

It was only on the final lap of the race that Zendeli made a small mistake to allow Viscaal to pull alongside him at the exit of Brooklands. The pair ran side by side and Viscaal got his nose ahead before they reached Copse corner.

Zendeli fought back in the second half of the final lap, bringing his car alongside Viscaal’s into Vale, but Viscaal had the edge as they entered the start finish straight and put his foot down to finish 0.189s ahead.

For most of the race, the main battle in the field was that for third. Having dropped back from pole, Ben Barnicoat held the position in the early stages of the race, but immediately came under pressure from David Beckmann and Theo Pourchaire after an early safety car period.

An issue for Barnicoat then dropped him down the order and into retirement and promoted Pourchaire to third. He was more than three seconds behind the race leader at this point and, though he began to close the gap, quickly fell backwards as Beckmann, Liam Lawson, and Jake Hughes renewed their pressure in the battle for the final podium position.

Pourchaire was shown the black and white flag for weaving as he tried to defend the position and appeared to heed the warning.

Lawson took fourth from Beckmann in the closing stages of the race and the battle for third ran almost side by side in the run to the chequered flag, but it was Pourchaire ahead of Beckmann by less than half a second at the line.

Championship leader heading into the race, Logan Sargeant fell backwards in the opening lap and became stuck behind fellow American Cameron Das in the battle for P11.

Sargeant finally found a way through for a moment before contact was made between the rear of his Prema run car and Das’s Carlin machine, and Sargeant slowed with damage. He managed to limp back to the pits but was forced to retire, earning his first non-finish of the season.

Team-mate and title rival Oscar Piastri fared better. Despite contact with Lawson early in the race dropping him back to eighth, Piastri fought back to finish sixth ahead of Jake Hughes and Frederick Vesti. Sargeant remains one point ahead of Piastri at the top of the championship.

Clement Novalak climbed up to ninth ahead of Enzo Fittipaldi, who snatched the final points paying position from Das on the final lap.