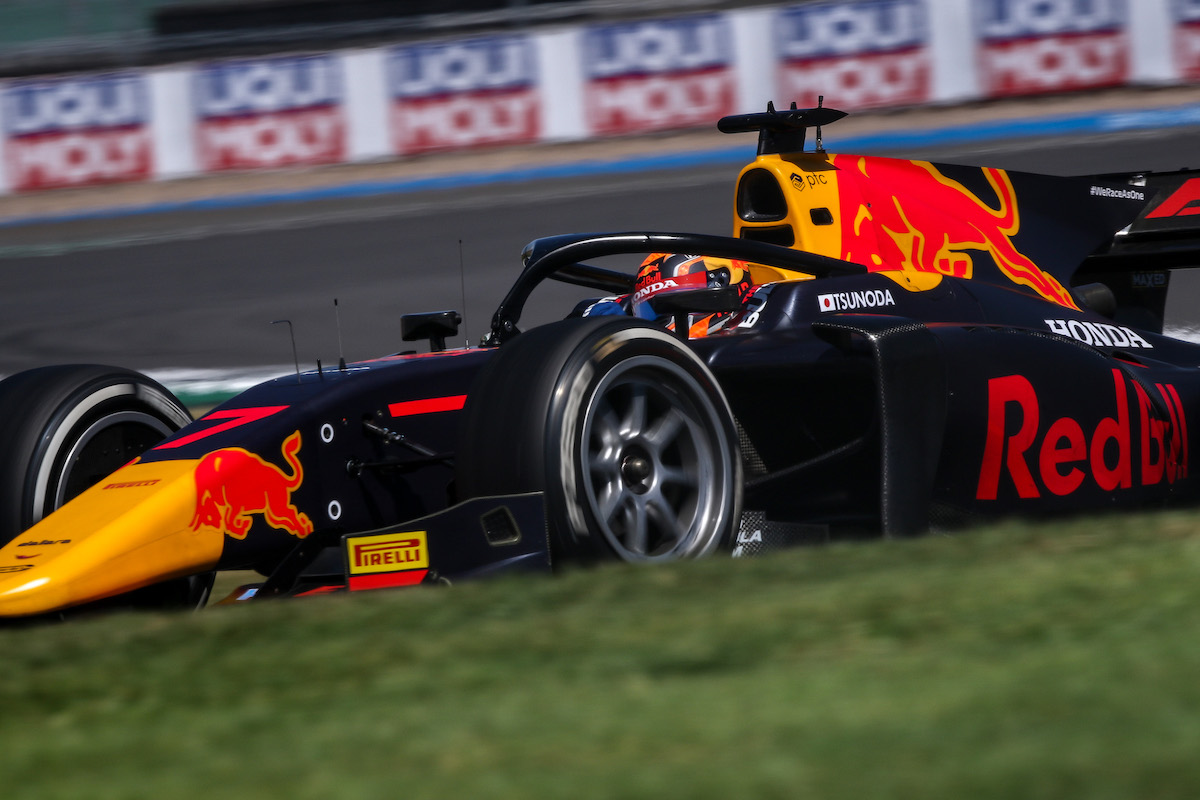 Yuki Tsunoda picked up his first Formula 2 victory in the Silverstone sprint race after Mick Schumacher and Robert Shwartzman collided fighting over the lead.

Schumacher tried to overtake his Prema team-mate Shwartzman around the outside into Brooklands with less than three laps to go but moved to the inside too soon and hit Shwartzman’s front wing.

With both drivers going wide, Carlin-run Red Bull-Honda protege Tsunoda steered his way into the lead and finished up 3.1 seconds ahead of Schumacher.

Shwartzman and Schumacher had started from the front row and maintained position at first, although Schumacher did take an optimistic look to the inside of his fellow Ferrari junior at Becketts on the first lap.

A big snap of oversteer at Brooklands on lap five dropped Schumacher over two seconds back, but he closed back up with three of the 21 laps remaining.

Schumacher escaped the contact that followed not only without any obvious damage but also without a penalty after stewards decided to take no further action. Nonetheless, Schumacher apologised on the radio to his team, taking the blame for the collision and saying he was “terribly sorry”.

The incident completed a miserable pair of weekends at Silverstone for Shwartzman, who failed to score at all one week ago and conceded the championship lead when he finished eighth in Saturday’s feature race.

He continued on with a broken front wing initially in third place, but finished up down in 13th.

Jack Aitken benefitted to seal a double podium on home soil. The Campos driver made a typically fast start to leap from sixth on the grid to fourth before Abbey, and while he lacked the race pace to keep up with the leaders, he was able to keep Louis Deletraz behind relatively comfortably.

Deletraz had been passed around the outside of Luffield on the first lap by Christian Lundgaard, but the ART driver later conceded the place when he ran wide at Copse on lap eighth.

Lundgaard had a repeat of the extreme front-left tyre wear he suffered in the feature race and on this occasion the tyre cried enough with five laps to go, leaving another championship contender without points.

Before that, Guanyu Zhou had made a bold outside pass on Lundgaard into Maggots and ended up fifth ahead of the feature race winner Callum Ilott.

Ilott had been shuffled back to 10th on the first lap but brilliantly re-passed Dan Ticktum around the outside of Stowe on lap four.

His move on Nikita Mazepin five laps later was not so clean, requiring a bang of wheels at Brooklands. Ilott accused Mazepin of moving under braking, a claim that seemed to be backed up by the pursuing Ticktum who also got by Mazepin to finish seventh.

With his two nearest rivals ultimately failing to score, Ilott now has a 19-point lead in the championship.