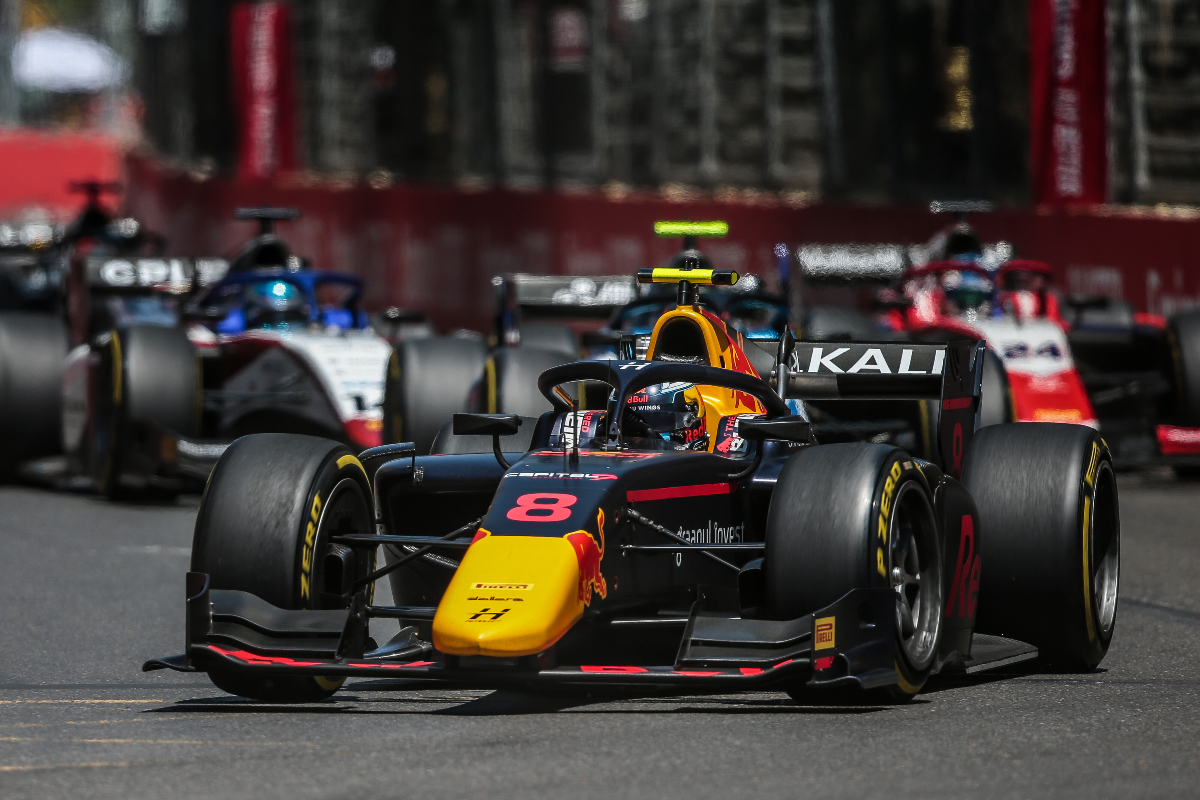 Hitech GP’s Juri Vips claimed his maiden Formula 2 victory in a chaotic second race of the weekend in Baku.

Multiple safety car periods and yellow flags disrupted running on the streets circuit, but Vips was able to avoid the drama to emerge on top.

Championship leader Guanyu Zhou and several of the season’s race-winners were involved in collisions over the course of the 21-lap race, in which only 16 cars finished.

Zhou wouldn’t make it past the first corner after he made contact with Dan Ticktum and span. Ticktum was able to continue, albit at the back of the field. Lirim Zendeli also came to a stop after running up the escape road at the first corner.

Theo Pourchaire and Ralph Boschung made contact on the opening lap, bringing and end to Boschung’s race and prompting Pourchaire to pit with front wing damage.

The multiple stricken cars brought out the safety car, after David Beckman had taken the lead from reversed grid poleman Bent Viscaal at the start.

Vips was in third, and came under pressure from Jehan Daruvala on the restart but managed to shake off the Carlin driver and snatch second from Viscaal shortly before another safety car period. This time DAMS’ Roy Nissany had run into the back of Richard Verschoor, ending the MP Motorsport driver’s race and earning himself a drive-through penalty.

Vips stuck with Beckmann on the restart. The Charouz Racing System driver was briefly able to put some air between himself and Vips, but it wasn’t long until Vips was back on him. A clean, DRS-assisted move allowed Vips to sail past Beckmann into a race lead he would extend in the remaining laps.

Beckmann and Daruvala completed the podium; Daruvala having passed Viscaal after the second safety car period. Viscaal took fourth, ahead of Robert Shwartzman.

Despite drama for Pourchaire and Ticktum early on, both would finish inside the top 10, such was the rate of attrition. Ticktum managed to climb up to sixth, assisted by contact between Liam Lawson, Felipe Drugovich and Christian Lundgaard that send Lundgaard into a spin and plummeting down the order.

Marcus Armstrong, who had been running fifth early on, also dropped out of the race after a small mistake sent him into the wall.

Oscar Piastri, who had started from the back of the field after a disappointing race one, took eighth, ahead of Pourchaire and Drugovich.