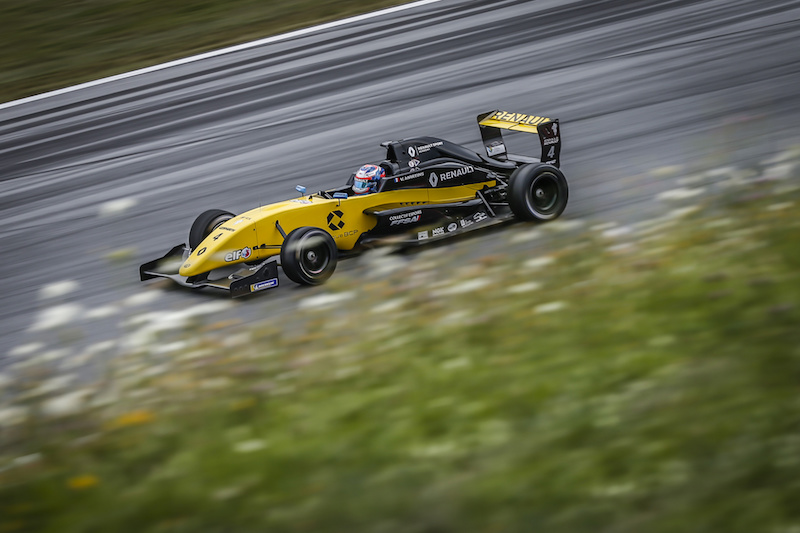 Victor Martins claimed his maiden Formula Renault Eurocup victory in the second race of the weekend at the Red Bull Ring after a thrilling early fight with Lorenzo Colombo.

Martins and fellow front row-starter Colombo spent the early stages of the race battling for the lead, with positions changing at almost every corner.

Behind them, Max Fewtrell and Christian Lundgaard fought for the final podium position, with Fewtrell eventually getting the upper hand to take P3.

As their battle stabilised, the pair managed to catch Colombo, forcing the JD Motorsport driver to defend and allowing Martins to escape up the road.

Martins finished 1.224s ahead of Colombo, who held onto second ahead of Fewtrell and Lundgaard.

Alex Peroni enjoyed a strong start to the race, passing Richard Verschoor and Ye Yifei on the opening lap to move up to fifth, but the MP Motorsport driver couldn?t hold onto the position.

Verschoor quickly found a way back through, leaving Peroni to battle with Ye and Logan Sargeant while he enjoyed a quiet second half of the race.

Peroni put up a stunning fight to hold onto sixth, forcing Ye to compromise his own race on a number of occasions but the championship leader eventually managed to make a move stick, finishing sixth.

Ye retains his lead at the top of the title standings, but Lundgaard?s fourth place finish allowed the MP Motorsport driver to close the gap to just seven points at the season?s midpoint.

Sargeant ran into mechanical problems in the closing stages of the race, dropping backwards before coming into the pits to retire. The American?s misfortune gave Peroni a little breathing room for the final two laps and he finished half a second ahead of Neil Verhagen.

Oscar Piastri and Frank Bird pulled off a daring move in the final laps to pass Axel Matus and take the final points paying positions.

Update:?Colombo has been penalised 10 seconds for a false start, relegating him to sixth in the results.