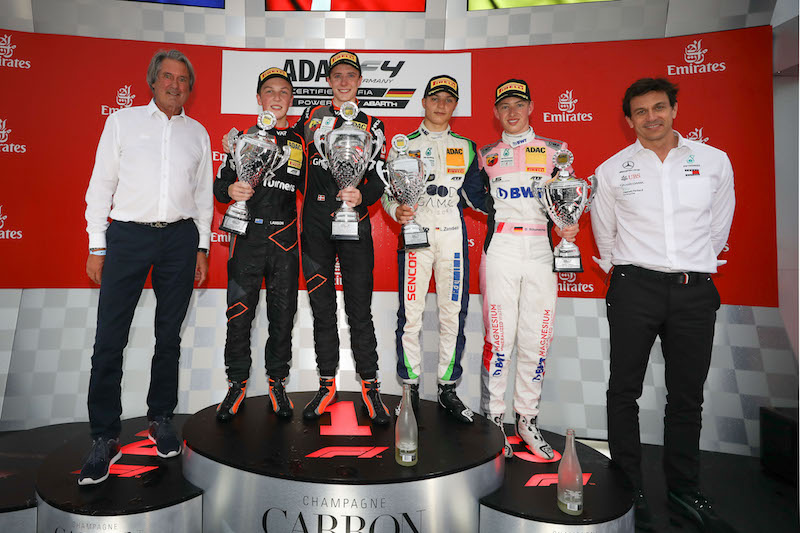 Frederik Vesti took his first ADAC Formula 4 victory of the season in the opening race at the German Grand Prix at Hockenheim, as Liam Lawson kept points leader Lirim Zendeli at bay for second.

The start of Vesti’s race was aided by Leon Kohler, starting beside him on the front row having yet to finish inside in the top eight in his rookie campaign, stalling and falling down the order.

His Van Amersfoort Racing team-mate Lawson moved up into second place and stayed there for the full race, although he came under attack from Zendeli during the final third of the race.

Less than six-tenths of a second separated the pair at the chequered flag as they completed the podium following some stern defending from Lawson.

After starting the race in eighth, Prema’s Enzo Fittipaldi was able to get himself up to fifth position by the end of the first lap ahead of his team-mate Olli Caldwell.

When the race restarted after a brief safety car to move Niklas Kruetten’s car after a Turn 1 crash, Fittipaldi was able to make a move in US Racing’s David Schumacher to take over fourth position, finishing the race with a 4.571s gap to the German in fifth.

His Prema team-mate fell down to seventh place by the end of the first lap after getting as high as third at the start of the race. Caldwell’s?race was further ruined when he lost his front wing after clipping the back of Schumacher’s car at the hairpin after the safety car restart.

Behind him at the end of the race was Frederico Malvestiti in his and Jenzer Motorsport’s first ADAC F4 race this season. He was able to hold up a train of Van Amersfoort Racing cars to keep seventh place after starting 16th.

Charles Weerts, who started 10th after being given a 10 place grid penalty along with five other drivers for a red flag offence during qualifying, made his way up to eighth.