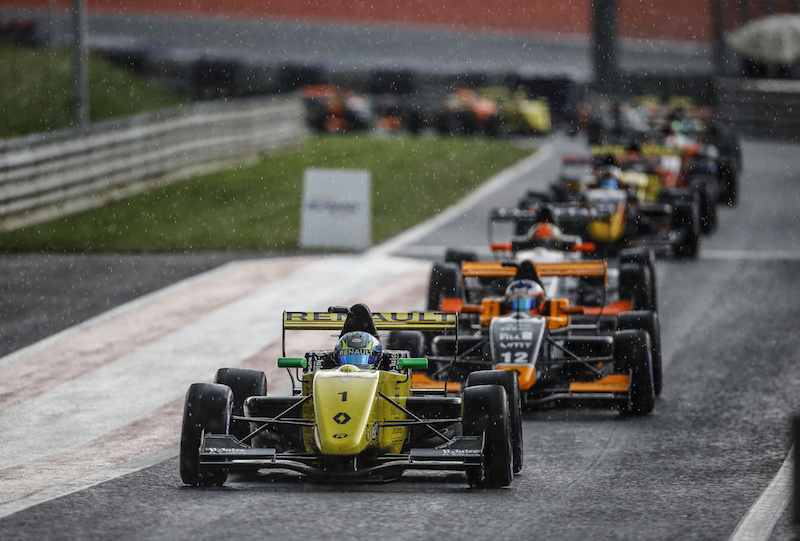 Fewtrell had led throughout the race when wet conditions brought out the safety car 10 minutes before the scheduled chequered flag.

The R-ace GP driver led the field behind the safety car for four minutes before the red flag was shown, bringing an early end to the first race of the weekend.

With the race falling just short of the 75% planned distance, only half points were awarded, putting Fewtrell third in the championship on 91.5 points.

Behind him, Richard Verschoor made a strong start from second on the grid, but couldn?t challenge Fewtrell at the start.

He finished second for his podium of the season, ahead of Lorenzo Colombo and Red Bull Junior Neil Verhagen, who battled up from ninth on the grid.

Championship leader Ye Yifei struggled in qualifying and started 11th for the first race of the weekend. The Josef Kaufmann Racing driver wasted no time making up positions, breaking into the top 10 before the end of the opening lap.

After a brief safety car ? brought out when Logan Sargeant was left stranded at the side of the track ? Ye continued his move forward, passing Charles Milesi and Victor Martins to finish eighth.

The only retirements came at the end of the opening lap, after Alexander Smolyar and Sargeant came together while battling in the top 10.

The pair collected Clement Novalak, leading to all three retiring, though Smolyar and Novalak were able to make it back to the pits. Vladimiros Tziotzis and Thomas Neubauer also came into the pits to retire on the opening lap.

Oscar Piastri and Thomas Maxwell finished sixth and seventh, with Martins and Milesi rounding out the top 10 after a race-long battle with Arthur Rougier.