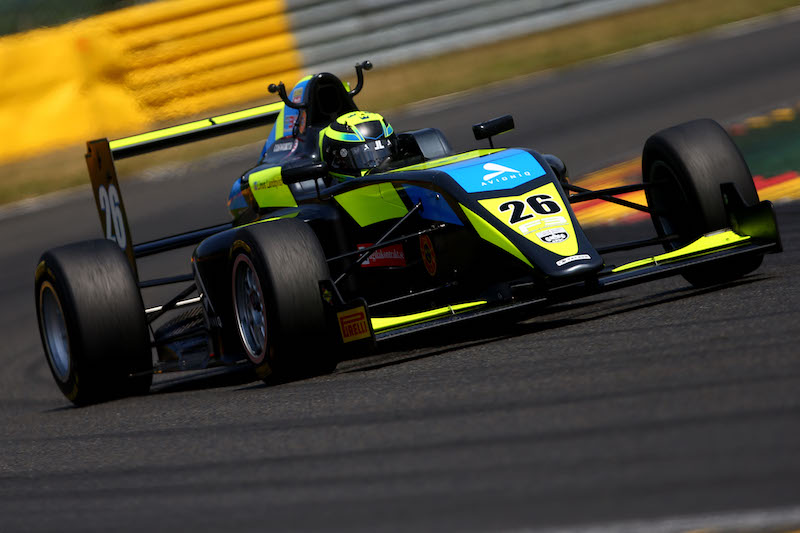 Linus Lundqvist took victory for the fifth time this season in BRDC British Formula 3 in the first race at Spa-Francorchamps.

The Double R Racing driver fell down to third behind at the start of the race, but quickly made his way into the lead on lap two of eight, just before the safety car came out after Max Defourny crashed heavily at Raidillon.

Lundqvist further extends his championship lead over second-placed Nicolai Kjaergaard, who made it up to fifth after making up six positions during the first lap of the race.

Polesitter?Tom Gamble finished just under half a second behind Lundqvist in second, his third podium in three races.

Gamble’s Fortec Motorsports team-mate Manuel Maldonado held onto third for the majority of the race after briefly being in second on lap two, but on lap six lost the final podium place to Lundqvist’s team-mate Krishnaraaj Mahadik.

Carlin’s Billy Monger lost two positions before the safety car, but after a multi-lap battle with Lanan Racing’s Kush Maini was able to take sixth position on the penultimate lap.

Jusuf Owega was the highest placed Hillspeed driver in eighth, with Carlin’s Sun Yue Yang behind him in ninth. Both drivers finished in the same positions they qualified, even after Defourny’s retirement and Ayrton Simmons dropping to the back of the field halfway into the race.

The top 10 was rounded off by Owega’s Hillspeed team-mate Sasakorn Chaimongkol after getting by the returning Jamie Caroline on the last lap of the race, with 0.107s separating the two drivers.