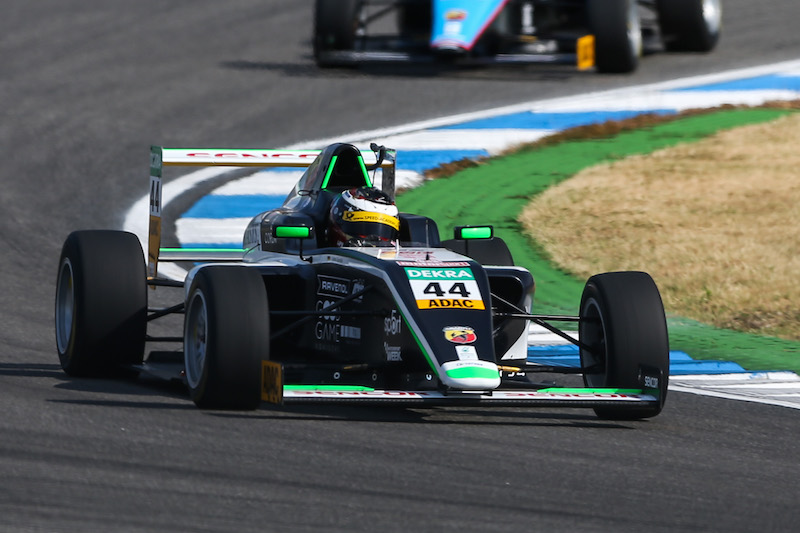 The US Racing star qualified on the front row alongside pole-sitter Lawson and took control of the lead of the race after a good start.

As Lawson tried to fight back into the hairpin on the first lap, he came under attack from David Schumacher. Minor contact between the pair at the following right-hander was enough to puncture Lawson’s tyre and damage Schumacher’s front wing, ultimately forcing both to pit.

This helped Zendeli to dominate the rest of the race despite two safety car periods, pulling a gap to second place at each restart.

Prema team-mates Enzo Fittipaldi and Olli Caldwell moved up the order early into the top three and battled hard throughout the race. It was Caldwell who got the better of his team-mate on track to end the race in second, his first podium finish since the Lausitz round in May.

Jack Doohan finished the race five seconds back in fourth, his best result in his five ADAC F4 races this season. He led a gaggle of cars which including Gregoire Saucy in fifth and Joey Alders in sixth, the trio fighting hard on track during the final 10 minutes of the race.

Prema’s Gianluca Petecof and Van Amersfoort Racing’s Charles Weerts caught up to the train but went over the line after the chequered flag in seventh and eighth respectively.

Niklas Krutten finished up in ninth for Mucke Motorsport, while Jenzer Motorsport’s Federico Malvestiti rounded off the top 10.

Race one winner Frederik Vesti moved up into third behind the first safety car, but he joined team-mate Lawson in having to pit.

Lawson finished up just shy of the top 10 in 11th with Vesti and Schumacher finishing 12th and 13th respectively.

His failure to score means Lawson is now 46 points behind Zendeli with six races remaining, having started the race 21 adrift.

US Racing’s Mick Wishofer?- who is fifth in the championship – was running in the top 10 during the opening period of the race, but ended up retiring from the race after his front wing was heavily damaged from contact, which brought out the second safety car of the race.