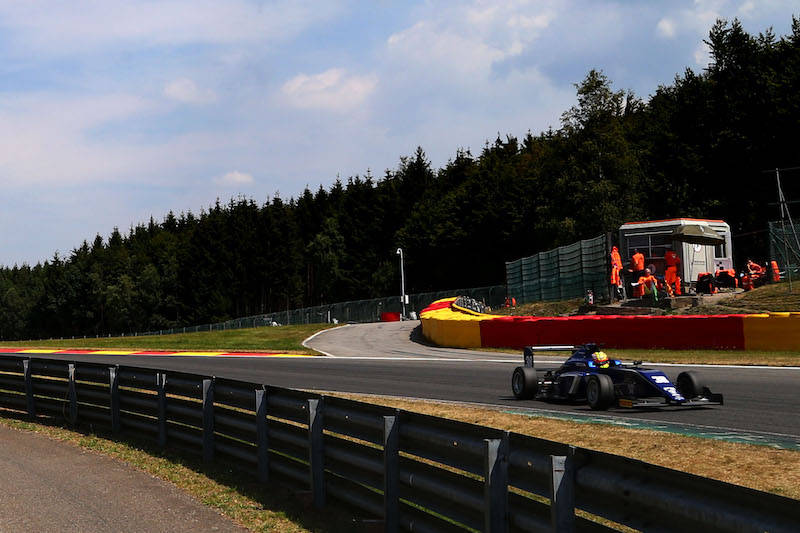 Jamie Caroline took victory on only his second BRDC British Formula 3 start, coming from eighth to win the reversed-grid race at Spa-Francorchamps.

Caroline, who joined the team for this round, surged up the order and into second place after the opening lap thanks to incidents in the first corner and a pass on the outside of Ayrton Simmons at Blanchimont.

The British driver quickly caught up to Fortec’s Tristan Charpentier, taking over the lead half-way through the race, then proceeded to create a gap to the Frenchman.

Although Hillspeed’s Sasakorn Chaimongkol – who started the race one place behind Caroline in ninth -? was on the back of Charpentier during the final few laps of the race, but?couldn’t find the time to make a move to claim second place.

Polesitter Simmons had to settle for fourth for Chris Dittmann Racing after being passed by Chaimongkol on the fourth lap of the race.

After starting the race in last, championship leader Linus Lundqvist was able to move up to eighth position by the chequered flag. He was as high as seventh late in the race, but had to hold off Hillspeed driver Jusuf Owega on the final lap.

Kush Maini rounded off the top 10 for Lanan?Racing, five-tenths of a second behind Lundqvist and Owega.